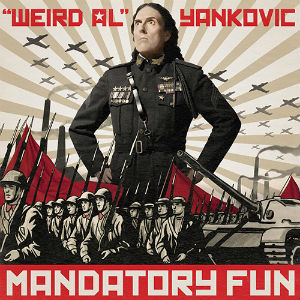 Usually my Sunday Funnies post is all about web comics, but this week is going to branch out. Weird Al Yankovich has released a new album this week, Mandatory Fun. And to promote the album, he has made eight music videos of songs from the album, and is releasing one video a day for the first week the album is available.

As Weird Al himself has explained in several interviews this week, he first became famous during the MTV era, when music videos on that network were the way to promote a new album. Now viral videos on the internet has replaced all that. His thinking is that a video that becomes famous on the internet enough to “go viral” is only really famous for a day or two, so the only way to promote something like an album is to release several videos over the course of several days.

The other thing he explains is that this album finally concludes the deal he signed with Sony 30-some years ago. So now he will be free to produce music the way you need to in the internet era: singles for digital download. “My songs are often topical. By the time I have made enough songs to release an album, most of the songs aren’t topical any more.”

Back in those MTV days, Weird Al’s songs were sometimes hit or miss, but the music videos for even his misses were comedic gems. I bought the album this week, and have listened to it, and I have to say that Weird Al is at the top of his game on this one. There were a few of the songs that I rated less than five stars… and the video for one of those came out after I listened to the song, and I have to say the video is fantastically funny.

So, I definitely recommend the album, and if you need some convincing, here are the videos he’s released thus far this week:

And if you haven’t already, please check out these previously recommended comic strips:

I’ve long been a fan of: “Mr. Cow,” by Chuck Melville… and not just because the artist is a friend! A clueless cow with Walter Cronkite dreams presides over a barnyard of a newsroom.

I’m also a big fan of “Deer Me,” by Sheryl Schopfer. This artist is also a friend. I have previously described this strip as: “Three roommates who couldn’t be more dissimilar while being surprisingly compatible.” Except in a recent story line Thomas has moved out! Eeek!

And I love this impish girl thief with a tail and her reluctant undead sorcerer/bodyguard: “Unsounded,” by Ashley Cope.

The Young Protectors begins when a young, closeted teen-age superhero who has just snuck into a gay bar for the first time is seen exiting said bar by a not-so-young, very experienced, very powerful, super-villain. Trouble, of course, ensues.