I’ve mentioned before that it’s my Mom’s fault that I am a fan of both science fiction and mysteries. From the time I was a baby, she would read aloud to me from whatever book she was reading (and when I got to the point I was trying to talk, she would cajole me into repeating back words and phrases and eventually whole sentences, which is how I learned to read at least a year before I was sent off to school). Since her favorite authors were Agathe Christie and Robert Heinlein, they made up a large proportion of what she read. But that’s a slight oversimplification. Because she read other books, too. The Christies and the Heinleins resonated with me in a way that the gothic romances she was also fond of did not. With one exception.

Mary Stewart wrote romances that weren’t always classified as romance. They were mysteries as well, and she integrated the two elements in a way where the solving of the mystery illuminated the character development as the characters fell for each other. So you’ll find some places classify her old books as thrillers, or mysteries, or romances, depending on the whims of the reviewer. Paperbacks my parents each bought tended to get taken back to used book stores to be traded in for store credit unless they were deemed worthy of multiple rereads. So there were only a couple of Stewart’s romances (most originally written in the 50s) that stayed on our bookshelves for years. One particular that I remember reading myself after pulling it off Mom’s shelf several times to look at the cover, was Stewart’s romance/thriller The Moon-Spinners.

If it was a typical used bookstore trip, my sister and I were each allowed to pick out one or two books for ourselves. I don’t remember which book I picked up that time. It was my Mom who bought the copy of Stewart’s The Crystal Cave.

Cave was not a romance. It was a first person account of the childhood and early adulthood of a fatherless Welsh boy named Myrddin, a man who would be more famous one day as Merlin the Magician. The story is set in the fifth century, when Roman rule of the British Isles is waning, and Saxon kings are vying for control. Myrddin’s mother is a minor Welsh princess, who refuses to identify the father of her child. Her enigmatic answers spawn rumors that his father was a demon. She ends up being put away in convent, and the child ends up in the care of a hermit who has recognized Merlin’s magical talents—though in Stewart’s stories they are more like some minor psychic abilities rather than hurling fireballs and complex incantations. Over the course of the book Merlin travels from Wales through England and on to Brittany, where he becomes attached to the court of Ambrosius. Ambrosius is of both Roman and Briton descent, and had been driven from the part of England he had ruled by the Saxon king, Vortigern.

It is revealed that Ambrosius had had an affair with Merlin’s mother when Ambrosius was still a prince, and for various political reasons they had never been able to pursue their relationship. Merlin returns to England to find his mentor killed. He is captured by Vortigern who plans to kills a “child without a father” because he’s been told the blood of such a person is the only way to lift a curse on his castle. Merlin figures out the real reason part of the castle wall is collapsing, convinces everyone it is because of two dragons underground, and figures out how to build the wall in a new place, earning him the position of Vortigern’s magician. The post doesn’t last long, because Ambrosius invades England, and defeats Vortigern (with an assist from Merlin).

Ambrosius dies (at a time Merlin’s visions had fortold), and his brother, Uther Pendragon, becomes king. Uther ends up in a war with the Duke of Cornwall, in part because he’s in love with the Duchess. Merlin helps his uncle both win the war and secretly consummate his relationship with the Duchess before the Duke’s death is widely known. Merlin’s not entirely happy with these events for both moral reasons and because he’s had some dark visions related to the later life of Uther’s son.

It was an incredibly fun read. I especially like how Stewart found a way to tie in a lot of the contradictory medieval tales about Merlin (which were probably contradictory in part because they were originally about two very different but similarly names legendary characters) into a series of events which seemed historically plausible. You could understand how second-hand accounts, embellished by a bit of superstition here and there, could lead to those various contradictions. Yet, Merlin did have some paranormal power. It was an epic historical novel with some fantasy elements.

At that age I was familiar mostly with various pop culture versions of Arthurian legend, though I had attempted to read The Once and Future King (which was actually four books in one), but had gotten bogged down pretty quickly once that book got past Arthur’s childhood. I would eventually re-read Once and Future…, but Stewarts vision remained my favorite Merlin. 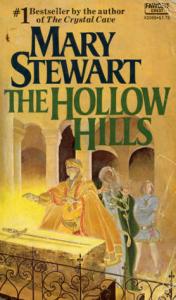 It was about five years later when I found a copy of the sequel, The Hollow Hills which covers most the life of Arthur from Merlin’s point of view. Because Arthur was conceived by Uther and the Duchess of Cornwall literally on the night the Duke was killed, Arthur is illegitimate, and has to be hidden away. Merlin places the child in the household of a minor nobleman, then goes off to Constantinople for a while. Eventually visions lead him back to England and an abandoned shrine to Mithras where he finds an enchanted sword that he becomes the guardian of. He sets himself up as a hermit with healing powers near the household where Arthur is growing up, and becomes a tutor to Arthur and the sons of the Count.

Seemingly by fate, Arthur finds the cave where the sword is hidden. He becomes a minor officer in the army, wins a battle, and through a series of events is finally acknowledged as Uther’s son. Arthur produces the magic sword, which he has named Caliburn which is taken as proof of his birthrite. Near the end of the book, Arthur is seduced by a young woman who he does not realize is actually his half-sister, and Merlin has a terrible vision of their child eventually killing Arthur.

I read Hollow Hills, then while Mom was reading it, I re-read The Crystal Cave which was still in her collections. And then I think I re-read Hollow Hills again. Stewart continued her very clever spinning of historically plausible events that could explain a lot of the contradictory legends, depending on how various rumors focus on which events.

There was a third book in Stewart’s series, The Last Enchantment which wasn’t published until my senior year of high school, and as it was I didn’t find it until a year later. Which, incidentally, kicked off another bender where I re-read the two earlier books as well. And then the fourth book, which takes place after Merlin’s death, The Wicked Day and is told mostly as a first-person narrative from Mordred’s point of view. I want to give these each their own posts later, though.

What I especially loved about these books is that they were books whose discovery I share with Mom. We read the first one together during those final months before the onset of puberty finally made it impossible for me not to realize I was gay. So while I was a bookish outcast who preferred the company of certain adults and almost any book to kids my own age, I wasn’t yet consciously confronting the full effects of internalized homophobia. Later, while a gulf was growing between us (as I tried desperately to hide my queerness from everyone, especially my family), finding the second book and getting to share it with Mom, spending hours discussing both of them together, helped us keep a connection going.

I also love them because they give a different perspective on mythology that just about everyone thinks they know well, and puts them together into a cohesive whole. And I think that Stewart is able to so perfectly portray the outcast young Merlin, feared by some who believe he’s demonic, despised by just about everyone because he’s illegitimate, and unable to fully connect with anyone who doesn’t share his psychic gifts, precisely because she was a woman who had grown up in the nineteen-teens and twenties, fought to try to become a professor in the forties (having to settle for teaching primary school instead until she became a lecturer in English at a university in the fifties), and generally trying to make it in a man’s world at a time that was even more chauvinistic than today

Finally, the way that Stewart conceived of Merlin’s talents as mostly psychic gifts rather than big showy fireworks, and how Merlin himself thought of them as a gift from god—weaving a sort of agnostic-christian-pagan hybrid of personal beliefs into a personal set of morals—helped me to imagine a way that I might be able to reconcile my fundamentalist upbringing with my intense interest in science and my growing understanding that being gay was part of who I was. In other words, a queer Baptist kid in redneck country could outmaneuver what seemed a dismal fate, just as a supposedly demonic, unwanted bastard prince might find meaning in life from visions in enchanted caves.