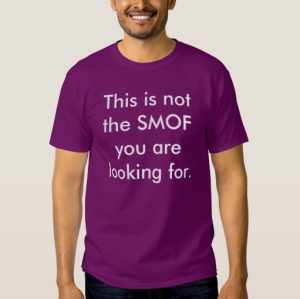 SMOF = Secret Masters Of Fandom . Shirt by the DannyBirtStore http://www.zazzle.com/thedannybirtstore (Click to embiggen)

Recently a lot of stories have appeared on my various social media streams about problems at sf/f conventions. Problems at conventions are nothing new, and are certainly not unique to fandom. I’ve written before about bad behavior that matches or beats any fandom convention horror story at professional trade shows and even an evangelical Bible conference I’ve attended.

At least one specific post over the weekend warrants some commentary: Mark Does Stuff – TRIGGER WARNING: For extended, detailed… | Facebook. Mark Oshiro was invited as a Guest of Honor to ConQuesT, where he and his partner were sexually and racially harassed both on and off panels, treated very strangely by con staff (including the chair) at Opening Ceremonies and the GoH dinner, and so on. It is not a pleasant story to read, and even more infuriating to see how the con staff many times assured him things would be taken care of, then months later told that no action would be taken on any of his complaints.

He concludes the tale with this explanation for why he’s going public:

Harassment is unfortunately a part of my experience at SF/F conventions. Not at all of them, but at most of them, something happens to me. I’m an outspoken queer Latinx, and it’s inevitable. However, since ConQuesT, every con staff that I’ve had to make a report to has dealt with my report quickly and fairly. At ConFusion this year, the concom dealt with my incident report in two hours. Meaning they spoke to the person and that person apologized to my face within two hours. At that point, it almost seemed comical that over half a year had passed, and both ConQuesT and Kristina Hiner did nothing at all.

That’s why I’m talking. I did what I was supposed to. I kept quiet, I trusted the system in place, and it completely failed me. I will not be attending ConQuesT this year or for the foreseeable future. (I’m going to WisCon for the first time instead!) I don’t feel safe there, and ultimately, that’s why this bothers me so much. There are people who are part of that community who were actively hostile to me, and when I reported them, the message was sent loud and clear:

We don’t care about you. At all.

It left me wondering why a convention would invite someone to be a guest of honor, then treat them this way. I can come up with a number of explanations, but even the most benign ones still leave no excuse for not dealing with the harassment incidents.

A certain number of responses (both at Mark’s original post and on various blogs reacting to it) trot out the usual blame the victim/blame no one defenses. 1) Surely if Mark had simply politely asked the harassers to stop everything could have been avoided, and 2) Con staff can’t prevent bad behavior and certainly can’t be expected to anticipate everything that might go wrong.

The first defense, besides ignoring Mark’s account that he did ask and otherwise signal his discomfort multiple times, completely overlooks the fact that speaking up for yourself, no matter how politely, often leads to even worse consequences than the original harassment. When folks are confronted about their offensive behavior, they frequently deny and escalate. One example happened in the comments of Mark’s posting (which was subsequently deleted, but not before someone took a screencap of it).

The second defense contains truth, but is also very misleading. Three of the problem people named in the post have been known to say and do those (or substantially similar) things at previous conventions. The panelist who took her pants off and kept bumping up against Mark and making weird faces even said, at the time, that she had gotten in trouble for doing that sort of thing on panels at that very convention previously! Con staff can’t predict the future, but surely they can remember problems from previous years?

I get it. I’ve worked on convention staff many times. My jobs have ranged from very low level gopher to being in charge of programming and vice-chair. I understand that the con staff is all-volunteer, always overworked, always understaffed, always juggling lots of things, and frequently doing all of this on too little sleep and without enough time. I understand that no one has time to vet every panelist. I get all of that.

And I’ve been on the other side. I’ve said and done things I realized later that I shouldn’t have. I’ve had to go apologize to people. I’ve been in situations where I should have apologized but wasn’t able to for various reasons. And sometimes when I’ve been confronted about something I said and did, instead of taking the complaint to heart, I’ve denied and gotten defensive—aggressively defensive. So, I understand and empathize with those people, too.

Some folks are defending the other panelists by trying to say it was all in good fun, or it wasn’t meant that way (whatever that means). You know, that’s exactly what bullies say when they get called out. “I was just joking around. I didn’t mean anything by it.” You can hurt people without intending to. You can make people uncomfortable without intending to. Your intent doesn’t change how the person felt while you were behaving that way. Just as saying you didn’t mean to break something doesn’t magically repair the broken thing.

If you sincerely didn’t realize what you were doing was making someone feel uncomfortable or unwanted or despised, it is all right to mention that in your apology. But the rest of the apology has to be sincere. “I didn’t realize how my actions affected you at the time. Now that I understand, I deeply regret what I said and did. It was wrong to put you in that position. I will try not to do that to you or anyone else ever again.” Something like that is a real apology and shows that you value the other person.

While the “Can’t you take a joke?” sort of reactions just confirms your utter disregard for anyone other than yourself.