The Secrets of the Universe

It’s been a really long time since I wrote any book reviews, so I’m going to try to get back in the habit of writing them more often. 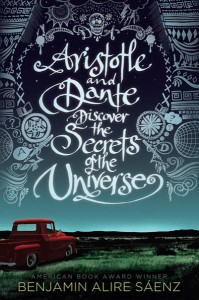 Aristotle and Dante Discover the Secrets of the Universe by Benjamin Alire Sáenz, cover by Chloë Foglia.

So, let’s start with Aristotle and Dante Discover the Secrets of the Universe by Benjamin Alire Sáenz. This novel is set in the late 80s and concerned a Mexican-American teenager named Aristotle “Ari” Mendoza. Ari is the youngest child in his family, but there’s a significant age gap between him and the next oldest. The other kids were born before Ari’s dad went off to fight in Vietnam, while Ari was conceived after his father returned. Ari is troubled by at least two family secrets: his older brother was sent to prison when Ari was too young to understand what was going on, and no one in the family will talk about what happened. The other secretive thing bothering Ari is that his father never talks about his experiences in the war, and many other things which Ari thinks might be important.

Ari narrates the book, and frequently describes himself as having no friends, until one summer day when he met Dante Quintana at the city pool. Dante discovers that Ari is hanging around in the shallow end because he doesn’t know how to swim. So Dante undertakes to teach him, and soon Ari and Dante are inseparable.

Even when Dante confesses he is gay, while Ari assures Dante that he is not, their friendship remains strong.

The official summary the publisher slaps on the back cover is: “Aristotle is an angry teen with a brother in prison. Dante is a know-it-all who has an unusual way of looking at the world. When the two meet at the swimming pool, they seem to have nothing in common. But as the loners start spending time together, they discover that they share a special friendship – the kind that changes lives and lasts a lifetime. And it is through this friendship that Ari and Dante will learn the most important truths about themselves and the kind of people they want to be.”

That summary doesn’t really do the book justice. But I can’t explain much more about the plot without giving things away which I think a reader will enjoy discovering right along with Ari and Dante. Two different events that could have been tragedies happen over the course of the two summers plus that the book describes. Neither comes out of the experiences unscathed. Along the way both young men make important discoveries. And yes, by the time the book is over, they really do discover secrets of the universe.

One of the things I love about the book is that despite Ari feeling that his father is keeping part of himself distant, the relationship between each of the boys and their families is close. Each set of parents express their love and respect for their sons in different ways, but despite the secrets in Ari’s family, the relationships being shown here are not dysfunctional. That’s refreshing in itself.

The story explores lots of themes. Yes, there’s a coming of age through-line, but the novel also deals with identity (particularly intersectional identity: class, ethnicity, and sexual orientation), social expectations (what does it mean to be a man; what does it mean to be a Latino, et cetera), familial expectations, the nature of friendship, the meaning of the many kinds of love, as well as what it means to find answers. The characters feel real, their problems feel real, and nothing in the plot every requires any of the characters to be stupid. Yes, the teen-age characters (not just Dante and Ari) make foolish choices, but they are realistic foolish choices.

Unlike some books (and movies and series) I could name, none of the characters suddenly start acting idiotically so the plot can go a particular way. This kind of storytelling leaves me, at least, rooting for most of the characters—and that is not at all a bad thing!

I’m hardly the first person to notice that Aristotle and Dante Discover the Secrets of the Universe is an awesome book. It was awarded a Youth Media Award by the American Library Association, as well as a Pura Belpré Narrative Medal, the Stonewall Book Award, a Michael L. Printz Award for the best writing in teen literature, a Lambda Literary Award, and an Amelia Elizabeth Walden honorable mention. Perhaps the most interesting recommendation I have read of it was a fellow subscriber to a literary mailing list who said that when another award-winning novel had wrenched her heart, Aristotle and Dante Discover the Secrets of the Universe had restored her soul.

This all may sound like hype, but the novel really is very good. I loved it so much, that after finishing the book, I bought the audiobook (narrated by Lin-Manuel Miranda who does an incredible job), and listened to it again. (Spoiler: I cried and laughed at all the same points the second time through as I did the first).