The Department of Justice estimates that about 1.7 million teen-agers are homeless in America at any time. Of those, about 40% identify as queer (that’s 680,000 kids). According to research by the True Colors Fund and similar groups, the single biggest cause of those queer teens being homeless is family rejection because of their sexual orientation or gender identity. But note that the next most common reasons are abusive homophobia or transphobia in their school, church, or community, even when their parents don’t go to the extreme of kicking them out.

Growing up in Southern Baptist churches in mostly redneck communities, I knew from a very early age that I didn’t belong. I was constantly breaking unspoken rules I didn’t understand. Nearly everyone–not just my physically abusive father, but other relatives, church leaders, many of my teachers, and a lot of the kids at school–made it abundantly clear that I didn’t act like a normal boy, and that if I didn’t figure out how to man up, there would be even more severe consequences than the beatings, teasing, and humiliations I was already enduring. I was taught–not just at church, but also at public school in health and science classes–that homosexuality was a severe mental disease that turned the people who had it into pedophiles, rapists, and worse. Homosexuals, they said, were evil creatures who deserved to die gruesomely.

When puberty hit, I finally realized that those two messages were one and the same. Puberty hit like a Tomahawk missle, blasting away my hopes of growing up to have what I had been taught was a normal, successful life. Because suddenly I realized that those odd fascinations I had had with certain men and boys wasn’t just friendship, they had been crushes. And now my hormones and body were reacting to the guys my emotions had been before. All of that added up to the horrifying conclusion that I could never man up enough not to deserve the scorn, ridicule, physical assaults, and even worse. It was no longer a matter of trying to figure out what I was doing wrong–it became a matter of life and death that I hide the truth about what I was from everyone I knew.

After fighting my feelings and having a couple of furtive relationships with other guys my age who were just as scared, I came to know with all my being that three things were absolutely true: If the wrong people found proof about what I was, I would be rejected and certainly come to an untimely and probably gruesome death alone and unloved. If I couldn’t stop having these feelings and acting on any of those urges, I would spend eternity in hell. And absolutely nothing I did–no amount of tearfully pleading with god, reading the Bible cover to cover three times, stealing my dad’s porn magazines and trying to make myself feel attraction to the women in them, et cetera–would make those feelings go away.

I was doomed. It wasn’t a matter of if, merely when.

Despite knowing I was doomed, my basic temperament just doesn’t accept no-win situations. So part of me kept trying to convince the rest of me that we could fake it as long as it took. I also had certain glimmers of encouragement I’ve written about before in science fiction. One thing I didn’t have was any role model or even a hint that there might be another kind of life possible.

There were no openly gay people in any of the communities we’d lived in until I was in my 20s. There were no openly gay characters in TV or movies or the like until at least my mid-teens. Oh, there were characters that seemed to be gay, but they were always either the comic relief or someone you were supposed to despise. When a few openly gay characters started showing up, they were never regular characters or even heroic. They were still either comedic characters, or victims. Very occasionally one would appear on a single episode to make a message about tolerance. But they were always alone and there was no sense they had a life or friends, let alone a love life! 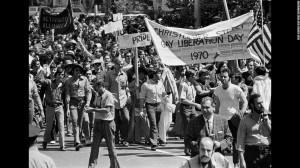 And then I saw a news story about a gay pride event that changed my life. I had seen some news stories before about the gay protest marches, but they had been brief, and were always accompanied by images of either very angry people with protest signs, or outrageous images selected to portray all the queers as freaks. This story did include some of those images, but there was more of an attempt to give the queer people a chance to speak. They showed brief clips from interviews with several people, but the moment that stuck in my head was when a pair of middle-aged men who were interviewed mentioned that they had been together for nearly 20 years. They were boyfriends, and they had been together for years.

That single bit of data changed everything. I was 19 or 20 years old. I had had a few secret relationships and flings with guys. They had all been steeped in anxiety and fear of what would happen if we were caught. These other closeted gay guys were the only queer people I had met, and they were all, so far as I knew, just as certain that we were going to burn in hell for eternity because of what we were. Though some of the fiction I’d read by then mentioned gay or bisexual people in relationships, it had all be in various sci fi settings where things were very different than the real world.

But there. on the TV in a news program two men who weren’t sci fi characters were comfortable saying on camera that they were boyfriends and had been for years.

It was several more years before I would even utter aloud to anyone the words, “I think I might be gay,” but knowing that there were actual, flesh and blood queer people out there who were in love and having relationships is what let me hold on to hope for a few more years and gave me the strength to finally come out.

And that is another reason I support Pride Parades and all sorts of other out gay events. Because there are tens of thousands of frightened queer children out there scared to death to be who they are. Worried that their own parents will reject them or worse. And because we know that every year hundreds of those kids commit suicide because they have no hope. As long as we have our crazy, flashy, glittery, contentious but fabulous pride parades and festivals and so on, then news sites will run stories about them. It doesn’t matter that the coverage may be slanted. Some of those frightened kids will see those stories. Some of them will click on those images. They will know that they aren’t alone. If we can give some of them hope, then our mission has been a success.

All of us who are living our lives out and proud got here because of the hard, brave work of the drag queens, trans activists, marching gays and lesbians and so forth who came before us. We owe them a debt we can’t repay directly. So we have a duty to not just pay it forward, but gay it forward.

If you can, give a donation to help queer kids who have been rejected by their families and kicked out on the street : True Colors Fund or The Ali Forney Center are good places to start. Many communities have local programs focusing on teen homelessness and particularly queer teen homelessness; a quick Google search with the name of your city or town, and the words “queer teen homeless” should point you in the right way. And if you want to hlp support transgender kids, please donate to: National Center for Transgender Equality.

3 responses to “Gay it forward”