Self-loathing self deceivers—they are never just hurting themselves 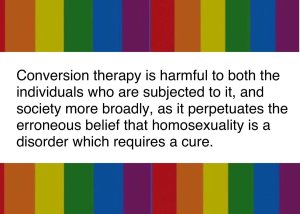 I know this story broke a couple of weeks ago. If I was still doing the really long weekly round up of links, it would have been included that week, and I might have typed a sentence or two of strongly worded commentary. But it didn’t make it into the top five stories for Friday Five. And besides, if I’m going to comment on the whole Josh Weed situation, I ought to make it a full-fledged post.

Let’s begin with the headline: This Gay Mormon Man Who Got Famous For Marrying A Straight Woman Is Getting Divorced. Quick sum-up, back in 2012 Josh Weed and his wife went public about the fact that he was gay, but that as devout Mormons they were choosing to be married. He claimed to be happy and fulfilled in this loving marriage with a woman, and by the way, he mentioned he was a therapist who was always happy to take on new patients.

He was quick to deny that he was pushing so-called ex-gay or conversion therapy. He was simply “helping those with sexual identity issues, unwanted sexual attractions and behaviors.” In interviews he insisted again and again that this wasn’t conversion therapy because he knew that no one could stop being homosexual. No, he was just helping people (“particularly young people”) struggling with this problem by “meeting them where they are and helping them find a solution that meets their needs.”

And specifically, he was holding himself up as an example of a gay man who could enter into a heterosexual marriage, never act on his same-sex attractions, while living a happy, fulfilled life that was congruent with his church’s belief that being gay was an abomination. Except, of course, he didn’t mention that abomination part.

To claim this wasn’t conversion therapy was to draw a distinction without a difference, at best. To do it while advertising one’s therapy services moves it squarely into the lying category.

“The couple is now apologizing to the LGBT community for how the “publicity of our supposedly successful marriage” has been “used to bully others.””

As part of the process of the downfall of the explicitly ex-gay conversion business (and it was always a business), there were a number of court cases (often parents of children sent off to this quack therapy now suing over the wrongful deaths of their children) where the practicioners were forced to admit under oath that at least 99.9 percent of the time no one was ever cured of being gay. Their previous claims about cure percentages was to count anyone who was able for a period of time to resist their feelings and put on a good front pretending to be happy while the refrained from acting on those feelings as a “cure.”

In other words, all the people doing it knew that it never worked.

Part of Josh’s and his soon-to-be-ex-wife’s apology now is to claim they are deeply saddened and ashamed that their story was used to bully other people. They write a supposedly heartfelt account of a person in his twenties coming home for Thanksgiving not long after the Weeds’ story first came about and being physically assaulted by his father because, “If Josh Weed can stop being gay, so can you!” And many many other horrible tales.

Here’s one of my problems taking this apology as sincere. This assault? Happened back in 2012. The young man who endured it wrote to them about in shortly after it happened. And he wasn’t the only queer person from a conservatively religious family who during the time the Weeds were in the headlines previously experienced something like this, went to Josh Weed’s website, and posted a comment years ago.

If Josh Weed was sincerely sorry about people supposedly misconstruing his allegedly not-homophobic story, he would have began issuing apologies and clarifications when the comments first turned up on the website. What he did instead, was to continue to insist in interview after interview in various publications throughout the years since that 1) he wasn’t providing conversion therapy himself, and 2) he didn’t think that him choosing to live in an opposite sex relationship implied that other people ought to do it.

That’s not my only problem with this. As part of their announcement and apology, they recount the epiphany that Josh had that his sexual orientation isn’t a “biological aberration” after all. Back in 2012 and in all those subsequent interviews, he constantly insisted that he didn’t think there was inherently anything wrong with being gay, he was just offering help to those who didn’t want to act on their desires. But now we clearly know that he and his wife (because while talking about the epiphany he also talks about all the conversations he had with his wife about it) believed all along that being queer was a biological aberration.

So in his apology he is tacitly admitting he was lying for all those years.

Listen, I used to be a self-loathing closet case. I spent most of my teens and twenties scared to death that people would find proof that I was the faggot that many of them called me all the time. I prayed and cried and pleaded with god during those teen years to make it go away. The Southern Baptist churches I was raised in are no more welcoming to queers than the Morman churches Weed grew up in. I understand how he got in that situation. I understand how the fear of being rejected by your family, your church, and everyone you know drives a closeted queer person to terrible rationalizations. I understand that when you’re in that situation, you are lying to yourself and trying to convince yourself to believe the lie even more than you are lying and selling the lie to everyone else.

And, yeah, I’m happy for him now that he’s finally realized that forcing himself to pretend to be happy and fulfilled in a marriage to someone with whom he wasn’t in love—a marriage in which his sexual and emotional needs weren’t being met—was actually harmful. And I’m happy that, unlike a lot of other ex-gays out there who came to their senses he’s actually gone public about it. And sure, it’s nice that he’s apologized for some of what he did.

But it isn’t enough. The current apology is just a variant on the old “if someone was offended” non-apology. He’s apologized that other people used his story to hurt queer family and friends, as if it’s just a completely unexpected side effect that he has only recently learned about. We know that he was contacted by a lot of the victims years ago. He knew. He knew and yet he used the impression people had that if he could pretend to be heterosexual than anyone can to advertise his own counseling services. And in those therapy sessions he told many patients all the things that he says now he’s realized weren’t true.

When people like Josh Weed tell their story of choosing not to act on their sexual orientation—when they actively seek out interviews and coverage in the religious press for their story—that lie he’s telling himself is weaponized by other people. It is used as an excuse by those people to bully their own queer children or any other queer people in their families and communities. It is used in far too many cases to bully those queer people to death. It is used as an excuse to throw queer and gender nonconforming children out on the street.

I’ve written before about my personal experience of having family members use the stories of people like Josh Weed as the justification to reject me, threaten me, and say I and my husband aren’t welcome. I don’t know a single queer person who hasn’t had someone browbeat them with stories like Josh Weed and other ex-gays.

I’m going to keep insisting that Josh was an ex-gay. It doesn’t matter that he rejected that label. The hair-splitting he was doing to justify the rejection was ludicrous. And I’m not going to accept this apology because it is incomplete. He wasn’t just deluding himself for those years, he was literally selling that lie to other people. And until he admits that he was doing that; until he admits that the weaponizing of his story wasn’t happening without his knowledge; until he admits that his denials about the nature of his counseling was wrong; until he admits his silence until very recently in the face of that weaponization was also wrong; he doesn’t have an ethical right to ask for forgiveness.