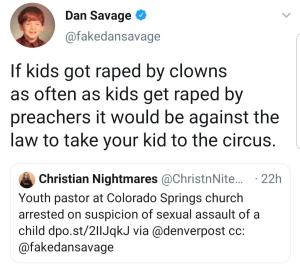 “If kids got raped by clowns as often as they get raped by priests it would be illegal to take your kids to the circus.” —Dan Savage

This is going to be a slightly different iteration of my semi-regular Weekend Update posts. Usually what I post in these entries is either a news story that I didn’t see until after I finished the weeks’ Friday Five entry, or new developments in a story that I have included in any Friday Five or Weekend Update post. This week, though, all but one of the stories listed below had come across my usual news feed and had been bookmarked before Thursday evening. I considered putting them in as a category in the Friday Five, but as of Thursday it was eight stories, not five, and the idea of choosing a “top five” out of these struck me as wrong.

First, let’s let some of the headlines speak for themselves:

Colorado youth pastor sentenced 50 years for sexual exploitation of a child and assault.

And this one nearly local to me: Church youth leader from Marysville charged with child molestation.

The Dan Savage quote above really sums it up: we have had the means to notice this epidemic for decades, but we continue to turn a blind eye to it. We let religious institutions shame the victims of their leaders. We let them move offenders to new jobs where they still have access to the types of people they victimize. We often give the religious institutions a pass when we discover that they have aided and abetted in these crimes.

Worse than that, we keep acting surprised when a religious leader (or a politician who flaunts their religious beliefs) who has been vehemently anti-gay turns out to be a sexual criminal of one sort or another. Instead of recognizing the pattern and staying on the look out of other telltale signs, we talk about how it’s just an opinion, or hide behind that disingenuous phrase “traditional values.”

We’re starting to get better. One of the previous times I wrote about the specific tendency of sexual predators to seek out jobs as Youth Pastors, I griped about the fact that news organizations often didn’t identify the arrested or convicted person as a pastor. They would often bury the fact that the criminal was a former paster somewhere in the story. Because once the situation gets to an arrest, the church or other religious institution has (sometimes very reluctantly) fired the person. That pissed me off for a couple of reasons. If a doctor is fired by a hospital, we still refer to that person as a doctor. They are currently unemployed, but they are still a doctor.

And it is newsworthy how the sex predator used the culture of religious institutions to commit their crimes. Also, very importantly: the sexual predators were employed as pastors are the time they committed the crimes.

So notice that in several of the stories above the news agency hasn’t just used the religious title in the headline, in more of the cases they didn’t put the word “former.” Though I admit that in two of the stories above, the first version I saw included that designation as a former pastor, and I specifically looked for other stories about the same crimes that didn’t do that. I failed on one, but the fact that I could find those headlines is, I think a little bit of progress.

I have one other story I consider to be in the same category as the others, even though it involves neither a pastor nor any allegations of sexual assault:

Father Abandoned Son on Side of Highway Because He Thought He Might Be Gay. This story as a few more details on the same incident: Father Charged With Abandoning “Gay” Child Outside Closed Police Station For Them To Find Him New Family.

Why do I consider this the same as the others: one of the most galling aspects of the pastor-as-sexual-molester phenomenon, is that the predator is supposed to be looking out for and even protecting the people they victimize. We also know that the reason so many of these predators go into the ministry and spout their homophobic opinions is to deflect from their own sexual proclivities. Society pressures people to be ashamed of their sexual orientation, and one of the symptoms of that toxicity is the homophobia-spouting sexual predator.

The father who abandoned his son on the road was supposed to care for that child. He is supposed to protect him from bad forces in the world around him, including homophobia. He’s not supposed to be one of those bad forces attacking his son. And he feels free to be such a bad force because of that same toxicity that society fosters—the entire homophobic/misogynist/xenophobic stew that people call “traditional values.”

I don’t have any sum-up for this, other than to say that abusive behavior, sexual or otherwise, isn’t a bug in the traditional values system—it’s a feature.