It’s not the truth that confuses kids, or, reflections from a closeted queer childhood 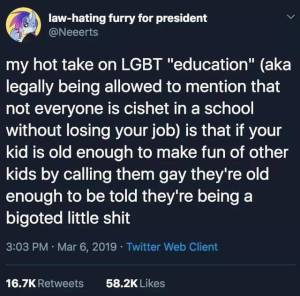 And the thing is, the people who most adhere to this idea of protecting children from even knowing that non-cisgender or non-heterosexual people exist all do a really poor job of that. Because I guarantee you that the children of those parents are the ones at school bullying any classmate who seems gender-nonconforming by calling them homo or sissies or some other slur. Kids may or may not understand the intricacies of adult relationships, but they glean and infer a whole lot about same aspects of sex and romance and related topics from the adults around them.

Some adults seem to completely forget what it was like when they were children. And that manifests in a couple of different ways. To illustrate, I’ll tell the story of two playdates.

Now, according to the Merriam-Webster Dictionary, the word “playdate” meaning “a play session for small children arranged in advance by their parents” didn’t come into the language until 1975, and these two stories from my childhood predate that (one happened in 1969, and other in 1971). And I’m not sure that 9-year-olds or 10-year-olds fall into the definition of small children, but the idea was mostly the same.

The first one happened early in the third grade. It was the first time I recall that my Mom took me to the home of one of my friends from school or church for the explicit purpose of letting us kids hang out. Mom also visited with my friend’s mother for a bit before taking my little sister to some other event, but I and my friend hanging out was the purpose of the trip. It was a fun evening, we spent most of the time in his room talking about comic books, as I recall. No big deal. Eventually Mom came back to pick me up. We went home. We had a few more similar get-togethers like that, usually with me being dropped off at his place, but it least one time his parents dropped him off at ours.

The second one happened in the middle of fourth grade. Because of my dad’s work in the petroleum industry, we had moved three times between these two playdates. Two of the moves involved crossing a state boundary. All three moves involved me being enrolled in a new school. At some of those intervening schools, we hadn’t remained in the area long enough for me to make much in the way for friends. At the third place, though, I quickly became very good friends with a classmate. Both of us were in orchestra (it was the first year I could join), and our mothers had met when they came to pick us up after practice.

So eventually, a plan was made when my classmate would be dropped off at our place for an evening. But the plan quickly became weird. Dad and a few other people made strange comments. I was getting teased about this friend.

Why? Because she wasn’t a boy.

When she was dropped off, her dad made some comments that made both Dad and Mom laugh, but just confused me. Most of the fathers of kids I’d known most of my life had owned guns. So why did her dad tell me about his gun and how handy it was to get to?

We spent most of the time sitting at the dining room table talking about our favorite books (she and I shared an adoration for The Hardy Boys and Nancy Drew). At the end of the evening, Mom drove my friend home and I rode along so we could keep talking. When we pulled up in front of her house, Mom told me that I was supposed to walk my friend to the door. I said, “Sure.” We both got out of the car and walked up to the front door. I remember that her family’s dog was barking really loud in the house, and she made a comment about how we needed to make sure the gate was latched, in case the dog got out of the house.

We walked up to the porch. She said, “Good night.” I said, “See you at school!” She opened the door and went inside. I walked back to the car. I spent at least half a minute making certain I had latched the gate correctly, then I got into the car.

And Mom was very angry at me. “When you walk a girl to the door, you don’t just leave her there and walk away! You’re supposed to go inside and thank her parents for letting her go out with you!”

“I didn’t know that.” All of those times the year before when the other friend and I had gotten together, neither of us had been sent in to thank the others’ parents for letting us hang out. Why was this different?

There was some additional fallout, including a lot of teasing at school the following week. The upshot was that my friend didn’t want me to talk to her any more in class or at orchestra rehearsal. I was very confused about the whole thing. Not because I didn’t know why the other kids were teasing us. I knew what “girlfriend” and “boyfriend” meant. But I also knew that those words didn’t describe our relationship—we really were just two orchestra nerds who liked reading! Once that teasing started, I at least had a slightly better idea of what some of the weird comments from adults beforehand had been about.

I have no idea if the boy I was friends with during the first part of third grade was also queer. At the time I didn’t know that I was, for goodness sake! It is true that one of the reasons we got along so well is because we both tended to be frequent victims of the same playground bullies, so maybe he was. Or maybe we were both just 9-year-old comics nerds who happened to hit it off. But none of the adults around us ever worried about us both being in either his or my bedroom with the door closed for several hours. No one’s dad made shotgun jokes when we got together. At the time, I had no interest in kissing other boys (that would come up a couple years later, when puberty hit like a freight train), and certainly had never thought of kissing him. We were just two guys who thought Spiderman was cool.

But everyone, including apparently our own parents, assumed I and the second friend were romantically interested. I can’t speak for her, of course, but since I’m not merely gay, I’m really most sincerely gay, that was the furthest thing from my mind. And 10-year-old me was just happy to have found someone who liked reading some of the same books as I did.