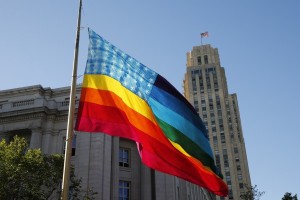 This is a recreation of one the the two flags Gilbert Baker orignally created from Pride.

I must admit, I did not expect there to be good news for queer people from the Supreme Court this year. The best I hoped for is that things wouldn’t get substantially worse. So when I saw the first headline this morning, I didn’t believe it: The US Supreme Court Just Ruled In Favor Of Protecting LGBTQ Workers
. I figured this had to be a joke. No way would this court, with two Trump-appointed arch conservatives on it, rule in favor of queer people! Right?

Yet, it did. And one of Trump’s appointees wrote the opinion!

It’s a 6-3 ruling, which is also unexpected. I want to pause here to point out that one of the rationalizations many Republican politicians have been giving for supporting Trump was that he had promised to appoint conservative judges that would start taking rights away from all us queer people. And one of those justices and just voted the other way. What was it a particular angel said? Oh, yes: “Evil always contains the seeds of its own destruction.”

One thing that is important to note about this decision is that it is about interpretation of legislation. This ruling does not assert that this is about a constitutional principal. So, if Congress passed a law amending the Civil Rights act of 1964 to change the verbiage of this section of the act (and whoever is President at the time of such passage signs it into law), this could all go away.

Clearly the Democrats currently controlling the House of Representatives aren’t going to vote for such a change, so there isn’t an immediate danger. But it is worth remembering this.

On the other hand, this case would appear to invalidate the reasoning the Trump administration used for writing the anti-trans rule that was announced on Friday. The policy that health care providers can discriminate against transgender people relies on the argument that when the Affordable Care Act says providers can not discriminate against an individual based on sex, that the term “sex” does not include gender identity. But today’s ruling says the opposite: it lays out that discrimination on the basis of sex does include sexual orientation and gender identity.

The reasoning is summed up in this sentence from the majority opinion: “An employer who fires an individual for being homosexual or transgender fires that person for traits or actions it would not have questioned in members of a different sex.”

Now, this doesn’t settle everything, and I’m sure there are going to be multiple legal challenges involving this, but I think we should all take a moment to savor a win.

Today’s announcements from the Supreme Court had two more pieces of bad news for Trump and his alt-right cronies:

Gun-Rights Appeals Turned Away by U.S. Supreme Court. There were ten different cases pending before the court where the court could have significantly expanded the definition of the right to bear arms and therefore invalidate some state restrictions. The court turned all of those away, leaving those restrictions in place for now (and signaling that if other states enacted the same restrictions, they would likely be left intact, as well).