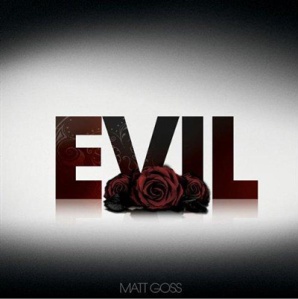 Sometimes evil is attractive and enticing. (Cover image for “Evil” by Matt Goss.)

Most stories involve a conflict. At the beginning of the story the protagonist is confronted with a problem, an obstacle, or a riddle, which will be resolved by the protagonist’s own actions at the end, and which is the thread that connects everything that happens in between together. Resolving that problem usually involves a struggle with other characters or forces, and some sort of inner conflict.

Protagonist is another word for hero. Because we often think of the main character of the story as a hero, and because stories usually involve the hero in some kind of conflict, it is tempting to think that every story needs a villain, too…

A villain who acts simply because it will hurt the other guy, or simply because “he’s evil” only works in an-over-the-top parody type story, not your typical narrative fiction. It’s true that if a particular pair of characters have a past, that one of them may feel so wronged by the other that getting revenge becomes a driving motivation, but that is really hard to carry off as the only personality trait and their only motivation.

What’s far more interesting, to me, is the “villain” who is doing the right thing, from his perspective.

This doesn’t mean that my villains are simply misunderstood, it means that in order to write them as convincing characters, I have to understand why they’re doing what they’re doing. Who they are and how they got into that situation has to make sense.

In the novel I’m currently copy editing, for instance, my primary antagonist and my primary protagonist are both trying to save the world. One of them believes that he is the only one who could save the world, because he knows that he is smarter than just about everyone else. And he certainly wouldn’t object, after it’s all over, if a lot of people wanted to show their gratitude. The other is not at all confident that he’s the right person for the job, but is very worried about what would happen if the first guy got hold of all the power that presumably comes with the world-saving talisman.

It was very easy to write my villain, once I had his motivation worked out.

Not all of my villains have such noble goals. Some of them are very mean people who take a certain amount of delight in hurting others. Even then, I know why they are that way, and if I had to, I could write a story from their point of view and make the reader feel that, though the character isn’t a nice character, there are reasons they’re that way.

I tend to use that type of more obvious villain in comedic roles. To me, the too overtly villainous villains aren’t interesting to write seriously.

One of my favorite villains is the villain who was once a friend. Because first, in order for them to have been friends, the villain and the hero would have had to have things in common. They would have each had to have qualities that the other admired. Why they had the falling out, and how that affects their current relationship are all grist for the mill.

Plus, the better you know your opponent, the more sore spots in their psyche you know how to poke. And of course, they are in an excellent position to return the favor.

Which brings us to today’s song. A not quite traditional Halloween offering. But a song I quite enjoy. And I hope you like it, too: