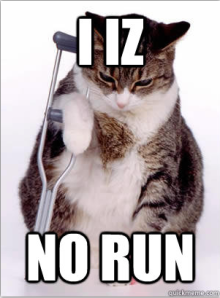 I haven’t been posting much for a variety of reasons. NaNoWriMo is eating a lot of my time, for one. But the last two weeks there’s also been near constant pain.

It started a couple of Fridays ago when one of my big toes swelled up with gout. For the next eight days, every morning I woke up with a different toe on one of the feet swollen. The worse was one night when the pain woke me in the middle of the night, and I needed to go to the bathroom, but when I tried to stand up, I nearly collapsed. I literally crawled part of the way to the bathroom. I eventually hobbled downstairs where my cane was, but even with the cane the thought of going back upstairs was too daunting. So I put a heating pad on my feet and sat in the recliner until my husband woke up.

Most of the days that week I worked from home. When I did go in, I had to use the cane to get around, and since the temperatures outside were 10-15 degrees colder than usual for this time of year, and since cold tends to make gout worse, it wasn’t fun. The next week was better. Several mornings my feet were feeling close enough to normal that I almost left the cane at home. By the end of the day Monday, Tuesday, and Wednesday I was really glad that I had taken it with me, because one joint was slightly swollen and in pain by the end of the day.

Thursday was the first evening I didn’t actually need the cane at the end of the day.

Friday was the only day I worked from home last week, and it was the first day that I felt like myself again. Usually on my work from home day, when I break for lunch, I start some soup cooking, and while it’s heating up, I’ll do a little housework. Unload and load the dishwasher, put away laundry, or some other task like that. It’s a nice way to stay away from the computer for a little bit and not think about work, right? But during all of my days working from home the previous week, I just didn’t have the energy. I didn’t have much energy for writing, either. I got writing done, but not at the rate I had been the previous couple of weeks.

It shouldn’t be a surprise, but it really felt weird and wonderful that day not to have at least one of my feet in pain. And it was the first day that I wanted to do housework. I didn’t just want to do it, I enjoyed doing it. Being about to move, to stand, the walk around without constantly bracing for how much the next step was going to hurt was almost enough to make me giddy.

So for the last few days I’ve been really grateful for the simple act of being able to walk without pain.