The cover of Half Magic, by by Edward Eager with illustrations by N. M. Bodecker.

I think it was in the third grade that I found the copy of Half Magic by Edward Eager in the school library. It was a tale about four siblings who are having a less than wonderful summer—even though during the summer they are allowed to check out more books at a time from the public library, and keep them longer. One of the children finds an unusual coin on the sidewalk, and because she is very bored she makes a wish. The wish is granted… sort of. After some experimentation they determine that the coin grants half a wish. Wish to go home, and you will find yourself magically transported to a spot exactly halfway there, for instance. Wish for a suit of armor, and you can half a suit (the right half, if I recall). So they start making wishes for double of what they want, but that seldom works out (what is half of two talking cats, you might wonder).

They have various misadventures with their wishes. Most of the misadventures are funny, though a few are a bit intense. It was a fun book. I read it several times before I had to take it back to the library. And I was extremely pleased to learn, when I took it back, that the library had a few more books by the author (Edward Eager), some of which starred the same set of siblings. In fairly short order I had devoured Magic by the Lake, Magic or Not?, and Seven-Day Magic. Which was the extent of what that library had. It wouldn’t be until six grade that I found copies of The Time Garden and The Well Wishers. I was getting to be a bit old for them by that point, but I recall enjoying them…

These books were all part of a seven-book series, the first couple of books about the original four siblings, the next few about the children of two of those siblings, and so on. I happened to pick up the first book of the series the begin with, but the library didn’t have the complete set, so I read books 1, 2, 5, and 7 initially. Then book 6 and book 4. I have never read the third book in the series.

The books were intended for kids, generally in the 8-10 year old range, as I recall. This sort of book used to be called Intrusive Fantasy—because elements of the fantastic and/or mythological intrude upon the mundane life the the characters. This sort of the opposite of Portal Fantasy, where the characters from our world are transported somehow to a fantasy world. Eager’s series could be classified as Contemporary Fantasy, though the first two are quite deliberately set in the 1920s, making references to historical events of the time, even though they were written in the early 50s. At the end of the second book, the four children are rescued by another set of children who mysteriously know who the first four are. In the next few books, which are set in the 1950s, the second four children, themselves the sons and daughters of two of the original siblings, take center stage. And in Time Garden we see the part of the misadventure and rescue from the end of Magic by the Lake, except from the point of few of the next generation.

Clearly Eager planned the time travel cross-over early on. And long before either Doctor Who or Back to the Future even existed! 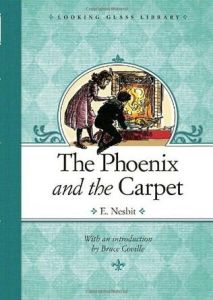 The point I am getting to is that Half Magic kicked off one of my long-term reading passions. I kept looking for more books where kids not terribly different than myself stumbled upon or were drawn into fantastic, magical adventures. After I read all of the Eager books that they had at the library in the town we were living in at the time, one of the librarians suggested I might like The Phoenix and the Carpet, by Edith Nesbit.

This book was written in 1904, and it concerns five siblings whose parents buy a used Persian carpet to go in the children’s play room. The kids have to clean the room enough to unroll the carpet, and the find inside the carpet a strange, unbreakable egg. They accidentally drop it into the lit fireplace, and it hatches into a phoenix, the fantastic mythological bird. The phoenix has been waiting inside the egg to be reborn for a very long time, and knows nothing of the modern world. The carpet is a magic carpet, able to fly and grant a limited type of wish a few times each day.

This is closer to how I remember the cover.

The children take all of this in stride a bit too easily, but they make references to an earlier encounter with a magic creature who could grant wishes. The kids have a series of misadventures, until finally the magic of the old carpet is used up. The phoenix has also bee exhausted by the children whisking him off to the other side of the planet a few times. So he lays an egg from which he will one day hatch again, and with the children’s help he set himself on fire. The carpet has just enough magic for one last trip, and it takes the egg to a place where it won’t hatch for another 2000 years.

The next year, when we had moved yet again, I found a different edition of The Phoenix and the Carpet, along with its sequel, The Story of the Amulet. I distinctly remember being surprised when I re-read Phoenix… merely a year later, because I had apparently decided I didn’t quite like the original ending, and had imagined a slightly different ending where the children see the egg hatch again, but the next incarnation of the phoenix doesn’t know them, and needs to go elsewhere to start a new life. Anyway, the sequel involves four of the children staying with a friend of the family who owns a boarding house (their father is off in a war, if I recall, and their mother and the youngest child have gone somewhere where the mother is recuperating from an illness). Anyway, one of the boarders is a retired egyptologist, and one of the objects in his collection if a magic amulet, which sends the kids off on another set of adventures.

Phoenix… and Amulet… are books two and three out of a trilogy. I’ve never gotten around to reading the first book, Five Children and It. I probably ought to, some day.

Though I’m a teeny bit apprehensive. A few years ago, my husband and I were checking out a new bookstore that had opened in our neighborhood. Among other things I found copies of much more recent editions of The Phoenix and the Carpet and Half Magic. I was a little dismayed when I re-read Phoenix… to encounter a bit of anti-semitism midway through. As a kid I hadn’t recognized the stereotyped depiction of two villainous characters as jews, but it was a bit more obvious as an adult. There’s also a somewhat troubling depiction of “swarthy-skinned savages” in another section of the book. Having been written in 1904, it isn’t that surprising to find such racism, but it’s still a bit disturbing.

I prefer to remember these stories as I understood them when I first read them. The possibility that magic might suddenly make an appearance in my life was a particularly intriguing and thrilling prospect. And the warning that magic can’t solve everything—in fact that leaping to the conclusion that there is an easy solution to complex problems almost always makes the problems worse—was a valuable lesson for both the real world and most fictional ones.