Presents under the tree 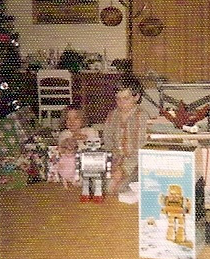 My sister and I with our presents Christmas morning at my paternal grandparents’ house. My guess is I’m about 9 years old in this pic. (Click to embiggen)

I remember lots of Christmases being asked to pose with my presents so one of my grandparents could take a picture. I remember it happening a lot. Some years they would have several of the kids pose together. Some years, particularly when one or more sets of cousins were present, they’d arrange a photo first with one, then the next kid, and the next until we were all done.

I don’t have very many of those pictures. I’m not sure which extended family member ended up with them. The picture above is one of the very few I have in which my sister appears with me. I don’t have any with my cousins. And since I never spent a Christmas with my younger half-siblings, I don’t have any with them, either. In the modern era of digital image sharing, I suspect that if people take that particular kind of picture that it gets shared with all the relatives who sent the kid a toy. I know that part of the reason this particular scan is such low resolution is that for a while one of the standard processing options you could ask for when sending film in to get photos made, was you would receive one image that was about 3 inches tall by 5 inches wide, and then printed on the same chunk of photo paper two smaller images, about one-and-a-quarter inches by one-and-a-quarter. Besides the two duplicate images being a lot smaller, they were also cropped square, so some of the image on the left and right was lost.

The idea was you could take some scissor and cut off the two duplicates from all the pictures and share them around. That’s how this picture, take at my paternal grandparents’ house, maybe by my grandparents, wound up in my other grandma’s photo album. One of the miniature duplicates was mailed to her.

The other reason the picture is a bit hard to make out is that the photo was printed on a faux-linen texture photo paper. The texture introduces some noise into the image. And over time, the parts of the texture that is raised tends to rub of and lose part of the image.

I cropped this down a bit to cut out the boring parts of the room in hopes the picture would look a bit more interesting, but the resolution at which it was scanned, plus the tiny size of the original are conspiring against me.

I remember the robot and kept it for years. It walked back and forth, the chest panel opened up and these sort of laser canon things folded out and made a lot of noise while the robot’s upper body spun around. In my early teens the robot started falling apart, so I disassembled it and tried to figure out if I could rebuild any of it into anything useful or cool. I never quite liked any of the things I transformed it into.

I don’t remember who gave that one to me, though based on the size my guess would be my paternal grandparents. I have a lot more memories of poking and prodding presents under the tree during the days and weeks leading up to Christmas than I do of opening presents Christmas morning. I loved lifting the presents, turning them this way and that, figuring out the relative mass of different parts of the package to get an idea of the shape of whatever was in the box. Guessing what materials the gift is made for by the weight, density, and most importantly the noise it made as it moved in the box.

It’s why my maternal grandma always set up at least one box with extra things inside (buttons, bolts, little bells inside mint tins, et cetera) to make weird rattling noises. And it’s one reason I don’t feel like a Christmas tree is complete until there are wrapped presents under it. It isn’t that I want a lot of gifts. I just want some wrapped boxes to try to guess the contents of. And to have days to check it out and think about it. It’s the puzzle and the potential of things in might be that seems to get the little kid in me most giddy.

There’s also the pretty paper and ribbons and such. Especially back when a lot of the presents would come from relatives who lived far away and would mail them to us. All of the wrapping would be different. One aunt might have wrapped on the presents in cream-colored paper with images of holly leaves and berries, for instance, and another had silver paper with snowflakes. I remember some wrapping paper would have images that weren’t just a few abstract or cartoon characters, but would be a fully illustrated Christmas scene, such as a family decorating a tree, or people going sledding. I like trying to compose stories for those pictures.

I now enjoy giving presents a lot more than getting them. Some years I try to wrap everything in similar paper. I seldom stick to it, though, because there is also certain wrapping paper I find that I think a particular friend or relative will really like it. Or it reminds me of them in some way. I seldom survey anyone afterward, but sometimes someone will comment on the cool wrapping paper, and that makes me feel as if I accomplished the mission.

I probably think about this sort of thing a lot more than other people do. But it’s a pretty harmless obsession. And it adds a bit of bright color to the world, so that can’t be bad.