Why do you think god hates anyone? 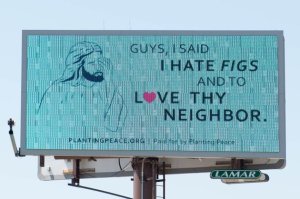 Billboard that went up in Jacksonville, Mississippi in April after the new anti-LGBT law was signed. “Guys, I said I hate figs and to love thy neighbor.” (click to embiggen)

I was twenty-three years old, sitting in a pew in a church with my head bowed and my eyes closed when the pastor leading the prayer thanked god for sending the plague of AIDS to the world to eliminate the scourge of homosexuality. He went on at some length during his prayer about how the devil has deceived many and led them into a life of sin. And he went further, talking about how the devil also deceives people who think they are righteous, making some people believe that homosexuality is just a choice, like buying a different brand of car than your neighbor, and that we can be friends with depraved sinners such as homosexuals, and still be good Christians. But that notion, he said, was a lie from the depths of hell itself.

It was hardly the first time I had heard condemnation of homosexuality coming from the pulpit, but the hostility of these pronouncements was much worse than usual. It was also a bit unusual for a prayer to have such a long expository lump. Not completely unheard of, but enough to make several people in the congregation shift nervously. The prayer was going on and on for quite some time.

The subject of the prayer was also at odds with the sermon we had just heard. The sermon had been delivered by a visiting preacher. The church was having a revival week, which meant that a pastor from out of town presiding of the services, and the church was having a service every night of the week, rather than just the usual Sunday morning and evening worship service and Wednesday prayer meeting. And the visiting preacher had just delivered a sermon about the unity of the church. Nothing about sexual immorality or the like.

The preacher leading the prayer was not the same man who had delivered the sermon. He was the lead pastor of the church. And the tone of his prayer sounded more like an argument than a supplication for divine favor.

I was trying not to have a panic attack. If the church had been my home church I would have been in even more distress. But this wasn’t my church. I was at this service because I was the assistant director of an interdenominational teen touring choir, and we had been asked to have our smaller ensembles take a turn each night providing special music for the service. The ensemble I led within the choir had sang two songs earlier in the service, and we were scheduled to sing one more for the altar call at the end.

Anyway, among the reasons that I was upset at this unusually aggressive prayer was that I had been, to use the evangelical terminology of the time, “struggling with homosexual temptation” for years. Not that I had ever told anyone. I was too afraid of what would happen if I actually admitted to anyone in my church or family that I even thought about homosexuality.

And I had done more than dipped my toe into the waters of temptation. There had been a several occasions during the previous ten years during which I had taken the plunge right into the deep end.

At the time of this prayer, it had been at least two years since my last plunge. And that had been with a stranger not just in another town, but an entire different country. No one I knew knew the guy—and truth be told, I couldn’t even remember his name. So I didn’t think anyone knew. But still, it seemed that the pastor was aiming all this anti-gay contempt at someone, and as far as I knew at the time, I was the only homosexual in the room.

It was not the first time (nor would it be the last) that, while sitting in a house of worship I would hear people like me described as depraved sinners and tools of the devil. But this time was the most vehement had yet heard.

Looking back on it, years later, I realize that there probably was an argument going on. The visiting pastor’s sermon about unity could be interpreted as a call for factions of the Christian faith to set aside their differences, while the local pastor clearly thought that some of those factions weren’t really faithful. But I couldn’t be objective enough at the time to work that out. I half expected someone to take me aside to stage an intervention.

Except the intervention would have involved people laying hands on me and praying fervently for god to cast the demons out of me. Which had been something I had been fearing since at least the age of eleven. And that didn’t preclude the possibility that other members of the community might waylay me and just beat me up. That very thing had happened to one of my classmates several years earlier. There had also been classmates kicked out of their homes by their families and sent “away” to stay with some distant relatives or other vague described living arrangements. 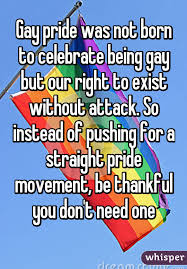 The fear of being kicked out of your home, rejected by your parents, siblings, classmates, and neighbors is something that every queer kid growing up in conservative Christian churches live with. A lot of other queer kids know that fear, as well, don’t get me wrong. But when you’re raised to believe that you are among god’s chosen, that anyone who is not a part of this community of faith means that you are destined to drown in hatred and sin, without ever knowing love and eventually spending an eternity in agony, well, it’s traumatic.

It’s not just that the haters are trying to take away the rights of adults, such as myself, who have the means to fight back. They spend years telling some of their own children that god hates them. So there was one bit of that prayer that was correct. This isn’t just a difference of opinion. This isn’t about them saying they want to drive gas-guzzling SUVs, while some of us prefer more fuel efficient cars. They are literally bullying children, sometimes bullying those children to death. And they want the rest of us dead, too: GOP Congressman Who Prayed Gays ‘Worthy of Death’ Weeks Before Orlando Still Has No Apologies.

This is why queer people need to be out of the closet. This is why we need to have Pride parades and festivals and all the rest. This is why it isn’t enough to say “to each their own.” As long as there are kids growing up being taught that god hates them, we need to call out the bigotry for what it is, and stand up for those who aren’t yet able to stand up for themselves.