It’s my country, too

I find myself in really odd discussions lately on social media. The worst, to be honest, happen on Facebook—usually with relatives. But it’s not just the cousin who keeps insisting that only immigrants object to religious Christmas displays on the public dime. Nor is it merely the aunt who keeps insisting that she doesn’t hate “the gays” or “the transgendereds” but is constantly posting memes and personally penned rants about how god is going to destroy America because of gay rights, and allowing trans people to use a public bathroom leads to rape. It’s not even the folks who argued that their right to sell assault weapons was more important that my right to not want to be gunned down in a gay club.

It’s also the folks who post the “Make America Great Again” memes, and unironically talk about how perfect America was in the 60s or 50s or whenever their childhood was. It’s the people who post the “Thank a Veteran” memes while voting for Republican congresscritters who constantly cut funding for veteran’s health care (and everyone else’s healthcare while they’re at it). It’s the people who describe themselves as “patriot” but think that means a very specific rightwing viewpoint. It’s the people who scream “all lives matter!” in the face of overwhelming evidence that the murders of black people, brown people, trans people, or women, or Jewish people, or people perceived to be muslim are never given as much attention by the justice system as other people’s deaths.

I love America. I have a favorite Founding Father (and I can go on at great length about why he’s my favorite), and I have a second favorite (and I can go on at equally great length as to why he’s my second favorite and why I understand that a lot of people prefer him over my fave). I can quote whole sections of the Constitution from memory. I get irritated at people who leave their U.S. flags out in the rain or fly them at night without illumination. I get teary eyed when patriotic music plays. I believe, even though many of the men who signed the document didn’t, that the Declaration of Independence was right when it said that we are all created equal (though I really wish it said people instead of men). I believe that America’s ideals are great, and wonderful, and visionary, and worth fighting for.

But I’m also painfully and personally aware that neither our laws, nor our society, nor most of our institutions live up to those ideals. America has seldom been great if you were not a cis white heterosexual male—preferably protestant (or let’s be honest, with a veneer of being a protestant Christian). If you were lucky enough to fall into that privileged category as a child, or the next best thing, to be the child of such a person and therefore protected by their umbrella of privilege, yes, America seemed really cool when you were younger.

Part of that was all that privilege, but another part was that most real world problems weren’t yours to worry about. Your parents were responsible for keeping a roof over your head and food on the table. If your family wasn’t poor, you spent at least part of your childhood completely unaware of most of the downsides of the world. Similarly if you were lucky enough to have loving, non-abusive parents. So of course life seemed simpler then. It wasn’t any simpler. Violent crime rates were actually much higher (because they have been steadily decreasing for decades), for instance. A lot of diseases we have treatments or even cures for now were completely untreatable. If you weren’t white, male, or straight, the law denied you all sorts of rights many take for granted, and often actually criminalized your existence.

And it’s not as if things are perfect and enlightened now: Millions of Americans Have Nothing to Celebrate on the Fourth of July 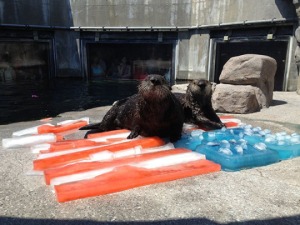 I mention America’s flaws not because I hate America, but because I love it and wish that we would live up to our ideals. As Elie Wiesel (the Holocaust survivor and Nobel Peace Prize laureate who died Saturday) said, “There may be times when we are powerless to prevent injustice, but there must never be a time when we fail to protest.”

No one who calls themselves an American patriot should sit in silence while injustice, racism, sectarianism, homophobia, or misogyny are being perpetrated in our name. James Madison (called Father of the Constitution, though he preferred to be remembered for authoring the original Bill of Rights) warns us, “I believe there are more instances of the abridgement of freedom of the people by gradual and silent encroachments by those in power than by violent and sudden usurpations.”

It is our silence and indifference that erodes the promise of liberty. It isn’t the immigrant (besides, unless you are Native American, you or your ancestors are immigrants), it isn’t the person who adheres to a different faith than you, or to no faith. It isn’t the lesbian couple trying to buy a wedding cake. It isn’t the trans person wishing to use a public bathroom. It isn’t the African-American mother demanding justice for her 12-year-old gunned down in a playground by police. It isn’t people asking to close some of the loopholes in background checks before guns are purchases. It isn’t the Jewish person asking that we not have a manger scene in city hall. It isn’t the recent immigrant working two jobs and trying to fit in English as a Second Language class while getting their kids through school.

None of those people or events are what has made America anything less than great.

Judging others for being different and denying them the rights of life, liberty, and the pursuit of happiness is not American—love, acceptance, and helping our neighbors is.

We Are America featuring John Cena | Love Has No Labels: