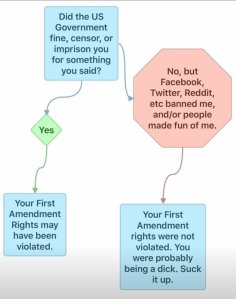 Flow chart to help figure out if your First Amendment rights have been violated. (Click to embiggen)

So I recently wrote about a professional internet troll who was finally kicked off Twitter after years of extensively documented organized harassment of (mostly) women on line. He was finally kicked off because he went after one of the actresses in Ghostbusters and she was famous enough that major news sites carried stories about it and so forth. In case there was any doubt about what will actually motivate a company like Twitter to enforce its own rules. Anyway, I got a fairly long comment on that post yesterday. The person left the comment under his own WordPress account, which links to a very active blog, so he isn’t trying to be anonymous. And he asks some questions, apparently expecting answers.

But I’m not approving the comment, and have added him to the blacklist because he couldn’t finish the comment without including racial slurs (aimed at the actress).

So I’m not going to subject anyone else on the internet to that. Since I have previously stated that my policy is to approve comments that disagree with me if the person seems to legitimately want to discuss, I confess that I wrestled with the decision for a little bit. One of the options I have is to edit a comment before I approve it. So I could just delete the slur, right? But I’ve never edited a comment, because that seems to cross a line for me. The comment system warns you that I screen comments and it won’t appear until approved, but editing opens me up for accusations that I’ve changed something else, you know.

And I honestly don’t want to send any traffic to a site run by someone who would deploy a slur like that.

But I do want to address a few things. The commenter first opined that if I were going to write about this particular instance of harassment, I’m obligated to write about any and every other instance of harassment going on in the world. No, no I’m not. This is a personal blog. I’m not a journalist. I’m not representing myself as a news site. I have been an editor of campus newspapers a zillion years ago, and worked as a freelancer for a short time; but even then, editorial discretion applied—a publication should choose which stories are relevant to their readers, and in how much depth to cover them.

The commenter went further and listed three specific events which he thought were similar to the organized harassment story I mentioned above, and asked whether I have covered them, as well. Again, with the assertion that I’m obligated to do so since I commented on this one. Of the three events he listed, two are mythical. They are false stories that many conservative web sites trot out from time to time that have been debunked. So, no, I have not written about them.

The third one, the Isreali Hasbera operation, well, I suppose it is worth commenting on, but if Al Jazeera has declared it a failure two years ago, I’m not sure what more there is to say about it: The grand failure of Israeli hasbara. An even bigger problem is that a government intelligence agency creating sock puppet accounts to harass and spread misinformation, while it is a deplorable thing, isn’t the same as a private individual encouraging other private individuals to flood yet another person’s social media accounts with racist and misogynist harassment, death threats, rapes threats, et cetera.

It’s a false equivalency. Just as a private company deciding not to serve a customer who abuses other customers is not censorship. I understand that the commenter is looking at the alleged online harassment by government officials as similar to other forms of harassment. Harassment is bad. Which I’ve said many times.

But I comment on things like that because I have personal experience with all of those things. I can write about them from that experience. I don’t have personal experience with the machinations of the Isreali government. The likelihood that I’ll have something to say that is any different or insightful than other articles/posts you can read on that topic is nil. So I don’t go there very often. I’m far more likely to comment on Isreali pinkwashing, because as a queer man, I have some experience seeing my very existence used as a talking point by politicians.

Yes, I’ve also commented on various atrocities committed by governments. So, maybe if there’s a new development in this area someday, I might comment on it. More likely I’ll include a link in Friday Links and let my readers who are interested follow up.

It’s my blog. It’s my opinion. I get to decide what I get worked up over, and what things I will ask my readers to spend their bandwidth on. The wingnut has his own blog. He can talk about these topics there.