The long, lonely death spiral of the anti-gay defenders of “traditional” marriage 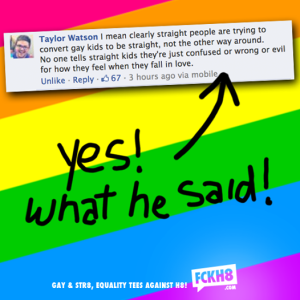 “I mean clearly straight people are trying to convert gay kids to be straight, not the other way around. No one tells straight kids they’re just confused or wrong or evil for how they feel when they fall in love.” (Click to embiggen)

So the so-called National Organization for Marriage hosted an event in Washington, DC that was supposed to be a March for Marriage (as a protest against Marriage Equality), and the attendance was even worse than last year: March For Marriage Draws Tens, But Promises Ultimate Victory Over Obergefell. The article I linked mentioned how previously the crowd was bolstered by people bused in. What they don’t say is that several of the busloads brought in last year were under false pretenses: a New York State legislator put out fliers in Spanish in community centers advertising a free trip to DC to see the monuments, so there were about a hundred people—mostly older ladies who didn’t speak much English—standing around looking confused at the edge of a small crowd, during the speeches, then they all wandered off to look at monuments on their own while an even smaller group of people marched to support traditional marriage. Oh, and they literally let a visiting French politician who was the leader of the French Nazi Party (I am not making this up) not only give one of the speeches, but she led the march!

None of the groups who previously organized bus trips did so this year. And the crowd, as the headline says, was tiny. One non-attendee who sort of live tweeted the event said that she counted the entire crowd: “47 if you include the babies.” The speeches were the typical anti-gay fare: how letting queers marry is destroying society, et cetera, et cetera. Then the not-quite four dozen people apparently marched down the street and glared at the Supreme Court building.

The downward spiral of this particular anti-gay hate group has been going on for years. I’ve written before about their tax and fundraising shenanigans. The tl;dr version: small donors stopped giving to them several years ago, so they are supported by a very small number of anti-gay millionaires (most of whom demand anonymity), and have had to resort to taking multi-million dollar loans from their associates religious “charity and education” non-profit to shore up the political side. They’ve skipped filing required tax documents since then (again), but I suspect when they are finally forced to disclose again the situation will turn out to be even worse.

I should mention that in the previous years some of those buses who brought people to the march were paid for by NOM. The story I linked says “groups,” but that’s another bit of chicanery. Most of the other non-profit groups that they used to like to list as supporting them were little more than shell companies of the main National Organization. People who were board members of NOM were each listed as the president of one of the smaller groups, and the individual groups didn’t do any serious fundraising, they were supported by the national organization (in turn relying on those aforementioned anti-gay millionaires). You may infer what you wish from the fact that most of those organizations have been dissolved and there were no buses bringing folks to the march. Can’t pay for buses without money, right?

I assume that if there is another event next year, that it will soon look like the pathetic ex-gay pride event four years ago: literally the only attendees were nine employees of the organization trying to sell ex-gay therapy, and about four internet news people covering the so-called rally. Note by that point, even Fox News was unwilling to send someone to cover the event. 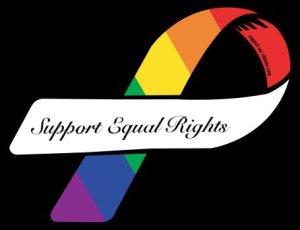 While it’s tempting to take some delight in the downfall of some professional anti-gay people (seriously, peddling anti-gay hate is how people like Brian Brown make a living), this hardly means that no one hates us anymore, or that there aren’t plenty of anti-gay groups out there supporting politicians who are passing laws to take away our rights. All it means is that on the topic of marriage equality we long ago passed the tipping point where a majority of Americans think queer people should be allowed to legally marry if they want. And it means that before then we also got to a point where a majority of people believe sexual orientation can’t be changed.

But there are some nuances. Polls have shown that about 10 percent of the people who think marriage equality should be legal, also still believe that queer people are either immoral, or mentally ill, or some other category of “less than” —they don’t approve of us, they don’t approve of our relationships, but they don’t think their objections rise to the level of justifying legal prohibition.
There is a more disturbing segment (but I haven’t been able to find any surveys that have asked the right question to quantify these folks; I’ve just read a lot of their opinions in various places) of people who agree that sexual orientation can’t be changed, and therefore ex-gay therapy is a fraud, but they also believe that we are irretrievably broken, or otherwise inherently flawed. So again, it’s not that they approve of us or support all our rights, it’s that they’ve come to the conclusion that therapy can’t fix us.

The war isn’t over, it’s just that the battle lines have changed. We may have won the battle for legal marriage, and the battle against ex-gay therapy, but there’s still plenty of fight to be had.