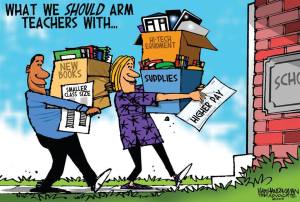 It’s the fifth Friday of March!

Work was insanely busy again, but right now I don’t care because I’m on vacation! My husband and I are attending the 41st Northwest Science Fiction Convention, along with a whole bunch of our friends. My husband is on staff this year, instead of doing his usual thing of volunteering in a bunch of departments, he’s just being an IT Ninja all weekend. I, meanwhile, I’m goofing off. And doing a lot of it in costume. Today, for instance, I’m wearing an upgraded version of the Social Justice Necromancer costume I debuted a friend’s Halloween party a few years ago. I’ll be handing out pocket Constitutions, Bill of Rights bookmarks, and other fun civil rights related things while supplies last.

But for now, I bring you the Friday Five: This week you get the top five (IMHO) stories of the week and top five videos (plus notable obituaries and a recap of my blog posts).

Stories of the Week:

The Quantum Physics Of Vampires.

Who Does She Think She Is?

This whimsical home made entirely from clay is basically a giant piece of pottery. .

Why ‘He Should Have Just Complied’ Does Not Apply to Stephon Clark.

For 1st Time Since Fatal Bombings Rocked Austin, Texas, Police Chief Finally Calls Serial Bomber a ‘Domestic Terrorist’. One of the few times ‘finally” is justified in a headline.

Photos: What integration after Brown v. Board of Education looked like.

Supergirl | Schott Through The Heart Trailer | The CW:

This Is Me – Cover by Shoshana Bean Featuring Travis Wall: