How we react to the world is both human and political, but I repeat myself 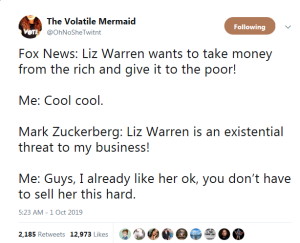 Despite the graphic, this post is not about what most people think of as politics. (Click to embiggen)

So, I’ve written a few times about social media, with the observation that a lot of the dysfunction that people like to attribute to the technology is really just human nature. Which doesn’t mean it’s not a problem, it’s just that neither tweaking the technology nor abandoning it altogether is going to solve those problems. But, the technology does have problems; sometimes one of those problems is that it is simply amplifying some of our less-functional traits, and sometimes it’s something much more complicated.

I’ve also previously mentioned that I’m one of those people who has found that if I don’t check Facebook from time to time I absolutely will get no news whatsoever from some branches of the family that I would like to stay in contact with. Muting and carefully unfollowing/blocking some people has decreased some of the previous annoyance—I don’t need to be reminded that Cousin Windbag thinks god will destroy America because I was legally allowed to marry my husband by seeing all the hateful memes and such that he posts constantly to his wall, for instance. And no one needs to see all the racists, xenophobic, anti-semetic nonsense Uncle Blowhard shares. But no matter how carefully I curate the feed, things get through that are a bit more than an annoyance.

Such as the friend request from an ex-step-cousin who (when he was a young adult and I was still a child) constantly referred to me as “that faggot” to other family members. I didn’t really want a reminder of that particular bit of childhood bullying, thank you very much. I don’t know why he decided to send me a friend request, but the particular political leanings displayed on his public wall makes it seem very unlikely his intention is to apologize.

Or the relative that, so far as I can remember, hasn’t contacted me in several years (to be fair, I also have not made an effort to reach out to them) who decided to send me a private message to offer condolences for the death of my father nearly three years after the fact. Now, offering condolences is fine—and there are many reasonable explanations for why someone hadn’t been able to offer them sooner.vBut here’s the thing: my dad was an emotionally and physically abusive man and it wasn’t at all a sense of loss that I felt when he died. Heck, one of my best friends made me practice saying, “We weren’t that close. We’d hardly spoken in forty years,” when my father was lying in hospice so I wouldn’t instead blurt out something inappropriate if an acquaintance or co-worker offered condolences.

This is also one of the relatives that I’m muting on my timeline because of all the anti-gay, anti-immigrant, et cetera stuff they post. In other words, all the same sort of things that Dad would rant about if you gave him a chance.

Sometimes people drift out of your life because of circumstance. But sometimes it’s a choice. Our different worldviews and values are a far bigger barrier to any relationship I’d have with this relative than the 1200 miles distance between our homes.

For example: the way our society is structured, you have to work to survive. If you aren’t willing to say that queer people, trans people, people of various ethnicities, and so should protected from job discrimination, then you are saying that you don’t care if those categories of people die. Similarly, if your reaction to finding out our government has been seizing children at the border and packing them into cages is to try to blame the parents rather than being incandescently outraged at the abuse of children, I am more than justified in judging you for that.

I’m allowed to decide I don’t want to be friends with people whose values are monstrous.

Many times when critiquing social media, people focus on the impersonalization—it is easy to forget that it is another person on the other side of the screen and say things we would never say in person. But there is also the inverse problem, particularly with the way some social platforms work so hard to connect you with people you used to know, mutual friends, an so on: over-personalization. I and the second relative mentioned above haven’t seen each other in person in decades, nor talked in years. But thanks to the social media, an illusion can exist of continued contact because they can see my posts.

In my mind, I’ve been giving this person the cold shoulder for years—but in a completely non-confrontational way. And admittedly, I’ve been happy about being able to mute some people and so forth without them ever knowing that I have. I’ve let the technology aid and abet my passive-aggressive method of cutting them out of my life. Which means I’m at least partly responsible for these awkward moments that do more to remind me of bad things from the past than cheer or console.

I don’t have a pat answer of how to go forward. I think it is okay to let yourself drift away from people who have more negative impact on you than positive. But I think it is also important to ask yourself whether you’re making an effort to be a positive in the lives of those around you.