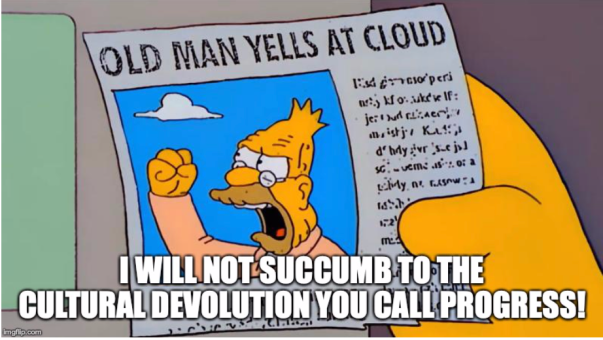 Since I’m doing NaNoWriMo this month, I don’t have a lot of time for blogging. But a particular kerfuffle has resurfaced in sf/f fandom and I had a lot of thoughts. I don’t want to go into all the details, other than it involves one older author writing both in a published column and then on his blog about how certain people (and oddly enough most examples he gives is sf/f written by women of color) are ruining things because they’re getting awards for writing stuff that isn’t good, proper, serious, hard science-filled science fiction.

Fortunately, other people have written things that are a bit more organized that I would likely be in a quick blog post.

First up, the following essay was actually written and sold to Uncanny Magazine some time before the old guy’s recent angry rant, but it just so happens to be a great take on the underlying topic: The Science, Fiction, and Fantasy of Genre. Just this metaphor alone is worth the read:

“It’s been said that whoever writes in the field of science fiction stands on the shoulders of giants, the towering titans of yesteryear. Their hard work built the playground; we just play in it.

“At the risk of thoroughly mixing those two metaphors, it occurs to me that even if we allow for the existence of giants, a playground in which we have to stand on top of each other can’t be very large, can it? And even the best playground could use some new equipment from time to time.”

But my favorite parts are in the middle—and too big to excerpt and still give justice—where she looks at famous works by Ray Bradbury, Arthur C. Clark, and Isaac Asimov and points out that none of them were about hard proper science, but actually about history, psychology, and sociology. It’s a really good read! You should check it out.

And then there is this incredibly wonderful bit of sarcastic artistry: Science Fiction vs. Fantasy: The Choice Is Clear.

“Where but science fiction could we find stories like Pohl and Williamson’s Reefs of Space series, which explores the possibility that the Oort Cloud could be filled by an ecosystem powered by biological fusion and that a few lucky humans might someday enjoy mind-melds with intelligent stars? And where but in science fiction could we entertain the quite reasonable possibility that someday a young woman with whichever psionic powers the plot of the week requires might have to contend with invisible cats? Who but science fiction writers will remind us of the very real possibility that one day starships might be propelled at superluminal velocities by the power of women’s orgasms?”

That last sentence is particularly relevant. Because the old author yelling about how modern science fiction has been ruined by all this fantasy? He’s the one who wrote about starships powered by women’s orgasms. And it wasn’t a parody—he insisted that it was serious sci fi at the time. Also, that is unfortunately not the creepiest sexual non sequitur he ever shoehorned into a supposed science fiction tale.

So, yeah, the angry man who wrote that stuff? He doesn’t get to lecture other people on not being serious enough in their science fiction and fantasy.

1 thought on “Old authors yell at clouds again—or, I thought sf/f was supposed to be about progress”