This one happened Thursday night, but I didn’t see the story until midday Friday, after I’d posted yesterday’s Friday Links, which is why I didn’t include it: Woman seriously injured in Renton theater shooting.

So, a bunch of people were sitting in the theatre, about 20 minutes into Michael Bay’s latest atrocity, that Benghazi movie, when a drunk guy is seen fumbling with a pistol and it goes off, striking a woman in another row, putting her in critical condition. Then the drunk guy flees the theatre, throwing the ammo clip in a trash can on his way out. Ninety minutes later, a man called the police to report that his 29-year-old son was “distraught” because he dropped his gun in a theatre and thinks he might have hurt someone. Police come and arrest the 29-year-old, who they decline to identify, but note that he has a concealed weapon permit. The victim, meanwhile, has been hospitalized and her condition has been upgraded to “satisfactory.”

This particular multiplex is one that I’ve actually been to, as it’s local to me (the third time we saw the Star Trek reboot was in this theatre, for instance), so there were a number of stories on local blogs and outlets. One that I read yesterday, but haven’t been able to find again, quoted a witness inside the theatre who saw a guy several rows ahead of him pull the gun out, which prompted the witness to slip his phone out of his pocket and quietly turn it on, fearing the worst. This witness insists that the guy never dropped the gun, but appeared to be playing with it, and definitely didn’t have to stoop down to pick anything up off the ground after the gun went off as he fled.

In a follow-up report, police say that the suspect claims he got his gun out because he was afraid there might be a mass shooting, and he wanted to be ready: Police: Suspected theater shooter brought gun to movie fearing mass shooting.

Well, good on him! The usual definition of a mass shooting is a single shooting event in which four or more people (not counting the shooter) are shot or killed. By shooting only one person, this guy successfully made sure that it wasn’t a mass shooting, I guess.

There’s a whole lot I could say about this, but they all go down the rabbit hole of the topic no one can be rational about. So, let’s limit it to a couple of questions:

The only silver lining I see to all this is, if he’s found guilty of felony assault, this idiot won’t be allowed to legally own guns any more.

While we’re on the topic of local idiots: Judge Rules Eyman Measure Unconstitutional. Tim Eyman is a local con artist and professional Initiative Sponsor (literally, that is the only way he’s made any income for many, many years), whose main target is taxes. Though ten years ago he took a detour into anti-gay territory and filed a referendum intended to repeal the state’s laws protecting discrimination based on sexual orientation. He literally showed up at press conference announcing the anti-gay referendum dressed in a pink tutu and thought that was a clever stunt. He switched to a Darth Vader costume for his actual filing of the initiative after the tutu evoked much criticism. That particular initiative failed to get enough signatures to even qualify for the ballot. 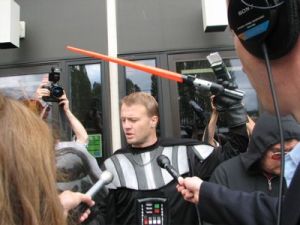 Hateful annoyance and perpetual iniative-sponsor Tim Eyman filing his anti-gay referendum when he took a break from his eternal assault on the state’s general fund in 2006.

His schtick of getting voters to pass limitations on taxes and the ability of the legislature to raise them have usually succeeded at least temporarily, though they are often thrown out as unconstitutional. This one is a great example. Washington’s constitution sets up relatively easy initiative and referendum processes (the signature threshold to get them on the ballot is very low, there is only one specific court that is allowed to rule on whether an initiative meets the definitions to go on the ballot before hand, so they can’t be tangled up in a long appeals process before the people get to see them), but there are some limitations. Initiatives must adhere to only one topic, for instance. And referendums to repeal a law have to turn in their signatures within a certain number of days after said law is signed by the governor.

This particular measure was essentially an act of extortion: if the legislature does not place a constitutional amendment requiring any future increase in taxes to pass with a two-thirds supermajority, then the current sales tax would be lowered, resulting in a loss of about $8 billion dollars in the next fiscal year. Voters, some of whom are eternally eager to believe that they can get all the state services they require without any taxes to actually pay for them, passed it, of course. But the judge ruled that the initiative is unconstitutional in two distinct ways: 1) it doesn’t adhere to one subject, being about both an amendment to the constitution and the current level of sales tax, and 2) it attempts to start a constitutional amendment through the initiative process, which the constitution clearly forbids.

One of the things that really annoys me about Eyman and his eternal initiatives (he’s already raises $1.2 million to put more on the ballot this year), is that he doesn’t even have to appeal this ruling. The state attorney general is obligated to appeal the ruling, and to defend the initiative (which every legal expert agreed was unconstitutional for the reasons the judge cited) all on the taxpayer’s dime. Meanwhile Eyman keeps rolling in the dough running more of these things up the flagpole.