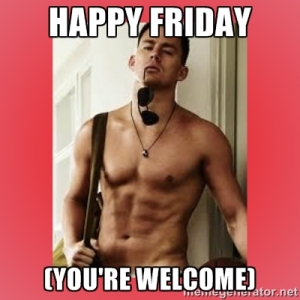 It’s a Friday! But it’s November already. How did THAT happen?!

I’m doing NaNoWriMo again, and we a little surprised at how many links I amassed even though I’m spending less time reading that news.

Anyway, here are links to some of the interesting things I read on the web this week, sorted into various topic areas.

Links of the Week

This week in white privilege

“While land rights and anti-Washington activists greeted the jury’s decision as a long-overdue victory for American liberty, others called it a terrifying invitation for armed protesters to occupy federal land and buildings with impunity, potentially putting federal workers at risk.”.

This week in the deplorables

This week in awful news

Sexual violence is one of the most horrific weapons of war, an instrument of terror used against women. Yet huge numbers of men are also victims. In this harrowing report, Will Storr travels to Uganda to meet traumatised survivors, and reveals how male rape is endemic in many of the world’s conflicts.

This week in awful people

Diana Davies Recorded Early Gay Lib. Here Are Some Of Her Incredible Photos.

Men Pull Out Of Male Birth Control Trial After Experiencing Side Effects Women Have Been Told for Decades Were Just In Their Heads.

Scientific Proof That Support For Trump Is Driven By Anger At Women.

DNA clues to how chipmunk earned its stripes.

[Most Articles About] Supermoons Are Super Dumb.

Abandoned in space in 1967, a US satellite has started transmitting again.

Jillian Holtzmann: queer as a salty parabola, she’s not here for straight people.

Fear of a Feminist Future: The alt-right hopes to be saved by the apocalypse.

We Have Always Been Here, Motherfucker.

This week in Writing

Maybe You Like Comma Splices, Maybe You Don’t: Jane Austen and Lewis Carroll used comma splices, but your English teacher might have a problem with them.

The POC Guide to Writing Dialect In Fiction.

HOW ROUGH A ROUGH DRAFT REALLY IS.

The connection between writing and dancing: What Beyonce Taught Me.

This Week in History

This Week in Tech

No, Facebook, ‘Diversity’ Doesn’t Explain Your Support of Thiel.

Facebook Lets Advertisers Exclude Users by Race. And in at least some cases this is an actual violation of federal law.

How Apple could have avoided much of the controversy. “A lot of it boils down to this concept: We demand Apple innovate, but we insist they don’t change anything.” … “If you think about it, perhaps the biggest change from my older, 2013 laptop is that it’s gone from having seven (yes, that many) ports, each with a specific purpose to having four points, each customizable by a cable to dongle to solve the problem you have… My laptop has a power port, an SD card port, 3 Thunderbolt ports and two USB ports. I know that in the four years I’ve owned it, I’ve never used the SD card, I use the Power port, one Thunderbolt port, and occasionally plug a USB cable in. So half the ports in this thing are never used — and yet I paid for them because they were built into the computer.”

No SD Card slot? It’s the camera companies you should be upset with, not Apple.

This week in Health

How the Fight to Legalize Cannabis Balms and Lotions Gave People with Chronic Pain More Options.

Feeling Happy for Others Can Make You Happy.

This Week in Inclusion

Why Queer Retellings of Classic Stories Are So Necessary.

Once Taboo, Gay Characters Are Taking Over YA Fiction. Not exactly…

TV Is Better for L.G.B.T.Q. Characters than Ever—Unless You’re a Lesbian.

This week in Difficult to Classify

Who is buying these $66 collard greens from Neiman Marcus?

fundamentalism, satan, and the end of a loyal opposition.

‘Ex-Gay’ Speakers Warn That Satan Tries To Drag People Back Into Homosexuality.

This Week in Fighting Back in the Culture War:

Universities work to purge male students of their ‘toxic’ masculinity.

Best reason not to vote for Trump: Franklin Graham: Vote Trump Or Else Right Wing Christians Will Lose Control Of America.

This week in Puff Pieces about the Election:

Staving Off the Apocalypse in Cleveland: I Canvassed in Ohio with Gary Shteyngart and We Saw the Real America.

The Only Article You Need To Read About Why Trump Voters Are Angry. “But, except for roughly 7,200 articles on the subject, there has been scant effort made by the mainstream media to understand the kind of voters who say Trump speaks for them.”

Republicans Pile On James Comey Over Handling Of Clinton Probe.

Five Reasons Not to Panic About Hillary Clinton Right Now.

Growing evidence of a hidden women’s vote for Clinton.

The Strange Career of the Voter-Fraud Myth.

GMA Fined $18 Million over Cover Up in GMO Labeling Fight. That’s my state’s attorney general winning the largest campaign finance fine in history, in this case against the Grocery Manufacturers Association for failing to disclose the source of $11million dollars worth of fundraising they did to defeat a food labelling initiative.

This Week in Racism

Why I Left My Dream Job at Second City.

White nationalists plot Election Day show of force: KKK, neo-Nazis and militias plan to monitor urban polling places and suppress the black vote. It’s not a show of force, it is domestic terrorism.

This Week in Sexism

The first time a man hurt me, I was 8. My story isn’t unusual.

John Zacherle, Host With a Ghoulish Perspective, Dies at 98.

No one else can tell the stories I have to tell.

False equivalency and taking a page from J. Edgar Hoover.

I’d rather be talking about Tricks and Treats!

There wolf! There castle! why sf/f doesn’t have to be serious.

WONDER WOMAN – Official Trailer [HD] (this is the first DC movie that looked interesting in a long time):