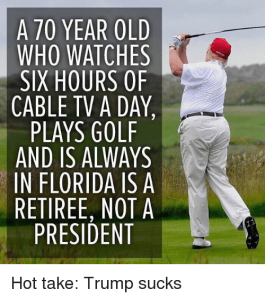 “A 70 year old man who watches six hours of cable TV a day, plays golf, and is always in Florida is a retiree, not a President.”

End of the year round-ups on news sites and such have never been my favorite thing; and this year I find myself even less interested than usual. There have been a number of times this year that made me think 2017 was trying to steal the “Worst Year of My Lifetime” trophy from 2016. And I realize that some of those round-up stories can remind us that some good things happened this year, as well as the bad. Regardless, this post is not going to be a sum-up of the year. It’s just a few things that I came across after finishing this week’s Friday Five along with some commentary and background information.

First up, a little good news: New York City: Felony Crime Rate Hits Record Low. One of the on-going American myths is the mistaken notion that crime is on the rise, that there is far more crime happening today than there was when we were younger or in the good old days, or whatever. But that is simply not true. At all. Don’t believe me? Take it away Brennan Center for Justice:

Even despite recent increases, rates of murder and violent crime remain at historic low points, almost 50 percent below their early-1990s peaks.  A preliminary analysis of 2017 crime rates in the nation’s 30 largest cities projects that the overall crime rate and the violent crime rate will decline to the second-lowest levels since 1990.

They have a lot of statistics and analysis (and nifty animated graphs!) on their site. It is true that in 2015 and 2016 several cities saw a dramatic increase in murder rates. However, the murder rate continued downward everywhere else. In 2015 the violent crime rate went down 2.6 percent compared to the previous year, and some people would say that a 2.6 percent change isn’t very significant (in fact, certain conservative politicians argued exactly that), but the fact that it was the 14th year in a row that the national violent crime rate went down is much more significant.

Also, they are projecting that the cities which had dramatic increases in 2015 and 2016 are all seeing declines this year, some quite large (Detroit looks to be seeing a 24% decrease!).

In news that is harder to classify: Trump Deported Fewer Mexican Nationals In 2017 Than Obama Did In 2016. This is a bit surprising given some of the crazy lengths that the Trump administration has gone to rounding up suspected undocumented immigrants. Part of me wants to make the cynical observation that the racist jerks can’t even pull off their racist policies right. I really haven’t found anyone analyzing this story in a way that we can evaluate why the deportation numbers (not just to Mexico) are so far down. Maybe because in their zeal that keep rounding up people who actually are here legally, then losing the legal fight to deport them anyway?

Let’s end with something funny. The Daily Show did an end of the year special, and this skit (don’t be like the idiots commenting on Youtube: it’s a parody of both the music industry, political songs, and much, much more) is definitely worth your time. Watch it all the way to the end! Song for Women 2017 (feat. DJ Mansplain) – The Daily Show: