Can I offer y’all some tea? 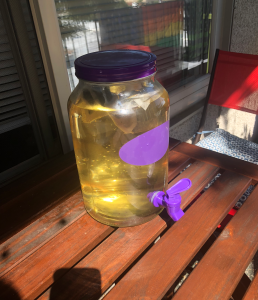 Making sun tea on my veranda.

A while back I was reading with more than a bit of amusement a conversation on tumblr where some Americans (by which I mean people from the U.S.), specifically some of my fellow southerners, were trying to explain sweet tea to some British folks. There were a few Brits who had spent some time in the U.S. also chiming in. I’m not sure if the most amusing bit was how many of the Brits were scandalized that most Americans don’t own tea kettles, or how horrified they were to learn about southern sweet tea. Southern sweet tea is not the same as tea which has had sugar or honey added. Southern sweet tea is an altogether different phenomenon. Just for a hint of what I mean, there is a recipe for Tea Punch (a different drink, but likely the granddaddy of sweet tea) from shortly after the American Revolution that includes this: “Make a pint and a half of strong tea in the usual way, then pour it boiling over a pound and a half of sugar…”

This article gives a nice overview: Why Sweet Tea Is the South’s Quintessential Drink.

In the movie version of Steel Magnolias Dolly Parton’s character observes that “sweet tea is the house wine of the south.” Which is true, though there can be weird nuances. For one thing, there are people who disagree about which parts of the country constitute the south. Seriously! I once had a temporary co-worker from Georgia sniff very disdainfully at I and another co-worker after we mentioned that our families came mostly from Oklahoma and Texas, that “those aren’t part of the south, those are in the West.” I have also heard people from North or South Carolina insist the Florida is not part of the south. I’ve been told by one acquaintance who grew up in New Orleans that “N’Orleans doesn’t really do sweet tea!” Whereas a friend whose family comes from other parts of Louisianna once commented after sampling my sweet tea, that I didn’t have nearly enough sugar in it. Some people insist that Sweet Tea states should get their own designation, with arguments about whether the “tea line” encompasses all of Texas, or only East Texas, for instance.

I grew up on sweet tea, and I learned how to make it from my mom and various grandmothers and one grandfather, and each of them had a slightly different recipe. They were all good in their own ways, but they were also very different. Many families guard their sweet tea recipes, sometimes referring to them by names like, “Great Aunt Pearl’s Sweet Tea.” So, before we get any further, I’m going to warn you right now that no, I absolutely will not tell you my Great-grandma S.J.’s Sweet Tea recipe, nor Great-grandma I’s, nor my Nice Grandma’s Sweet Tea recipe nor her Sun Tea recipe (which is a different beast altogether).

What I will do is tell you my Evil Grandmother’s Sweet Tea recipe. One reason why is because she frequently told it to other people outside the family. Another reason is because I don’t think hers was the best, but it will give you an idea of how these go.

My Evil Grandma insisted that Sweet Tea was best made in an aluminum pitcher. She had a 2-quart aluminum pitcher for just that purpose. To make her tea, you fill a whistling tea pot with water and set it to boil. While it is going, you measure out four and a half cups of sugar into the bottom of the aluminum pitcher, then you add a half teaspoon of baking soda. You let the kettle get to a loud whistling, then pour the still boiling water into the aluminum pitcher. Stir furiously until the sugar dissolved, then count out fourteen Lipton flow-through tea bags, put them in the pitcher, stick a lid on it, and put it into the fridge for one hour. Then, take the pitcher out, pull out the tea bags, but make sure you squeeze them so all the dark tea gets into the pitcher. Top off the pitcher with however much tap water is needed to fill, and stir some more (because some of the sugar probably precipitated out). Put it back in the fridge for at least another hour. Now, you can serve it over ice.

I will neither confirm nor deny having witnessed two relatives almost come to blows over an argument about whether an Earl Grey tea is ever suitable for sweet tea (with a third relative opining that Earl Grey is all right in a sun tea as long as you have a few other kinds with it, but really should only go in to sweet tea if you have nothing else).

Why do some recipes include baking soda, you may ask? Tea leaves contain tannic acid which is very bitter. When you steep most teas for more than, say, 2 minutes, you can get a lot of tannic acid in the tea. Some people swear that a small amount of baking soda (which is an alkaline compound and will neutralize an equal amount of acid) mellows out the tannic acid flavor. I’ve also heard people claim that the baking soda helps with dissolving more sugar into the water.

Many recipes specify how to boil the water. There are people who insist the sugar must be in the pitcher that the hot water or hot tea is poured into. Others say that most of the sugar should be mixed with the water as it is brought to a boil.

My Evil Grandma’s sweet tea was very dark, nearly the color of coffee. A lot of people say that is two strong, the tea should have more of a rich reddish color than a deep brown.

Because most of my life has been lived outside of the sweet tea states, I got used to drinking the rather weak and completely unsweetened tea served here. Also, in my late twenties when I realized just how rampantly adult-onset diabetes stampedes through my dad’s family, I made the decision to mostly stop sweetening my tea or coffee. And now that I am diabetic, I don’t make sweet tea ever.

And while we’re on the subject of diabetes, I want to point out that all of the sweet tea recipes from my mother’s side of the family called for way more sugar than any that I learned from Dad’s side, yet Dad’s family is where almost all the diabetes is. So don’t come at me on that.

While I don’t make sweet tea, I still make and drink a lot of tea and have many fond memories of sitting down with friends and family, everyone with a frosty glass of tea, on hot summer days. So the last few weeks, after my husband brought home a one gallon glass jug, I’ve been experimenting with sun tea recipes, based only loosely on my Nice Grandma’s. Put the collection of specific tea bags in the water, set it out in the sun for an hour, then remove the bags and let the jug chill in the fridge. The one thing to remember about sun tea is that since the water is never brought to a boil, it is more susceptible to bacterial contamination, so you want to finish off the whole batch in no more than two days.

It’s not quite the same, but drinking the cold, unsweetened tea that I’ve made this way, brings all those fond memories back. As Fred Thompson observed in his book, Cornbread Nation,