Millions of Voices Cried Out in Terror — or, That’s Not the Force You’re Feeling, Guys 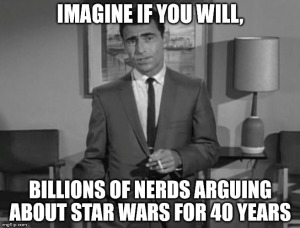 I’ve started this blog post many times, but I either find myself wanting to pull my hair out at the mental gymnastics the haters (who claim to be TrueFans) keep putting themselves through to try to make their arguments that up is down and two billion plus one billion equals zero… and I keep giving up. When the craziness first came to my attention, back in those bygone days when the first trailer for The Force Awakens sent them into a tizzy of anger and outrage, I figured it was just an age thing. Right? I was 17 years old when the original Star Wars came out, and I had watched the Watergate scandal unfold and take down a corrupt president a few years before. I understood that the Empire was a corrupt government founded by people who had, at one point, been treated just as any other politician proposing what ideas that some people disagreed with who turned out to be fascists who destroyed the old government, and that the Rebellion was being led by the remnants of what had been the opposition party before all of that. In other words, I understood that every single plot element in the original Star Wars was about politics.

These other folks, who whine and rage about the new movies, I just assumed they were closer to the median age of the typical internet user. Their first exposure to Star Wars had been to see it on a TV at home, possibly when they were too young to remember the first time. It was just something that was always there. Whereas I saw it as a great movie that changed the way the genre was perceived as well as creating a seismic shift in all of pop culture, to them it had always been there. And they had been too young to understand that the word “empire” was inherently political, just as the phrase “rebel spy and a traitor” was also inherently political.

Oh, how naive I was just a few years ago. I hadn’t realized that the problem was much deeper than that.

Before I go on, a few other people have examined in depth a couple of the issues at hand, and rather than try to construct the same analysis, you should go check these out:

The Beautiful, Ugly, and Possessive Hearts of Star Wars.

Biased Opinion – The Wailing Ignorance of the Star Wars Fanboys.

The latter post, by the Aaron Pound, is extremely helpful in this discussion if for no other reason the two tables showing how all of the movies in the Star Wars franchise have done at the box office, and comparing them to other franchises (expressed in millions of dollars): 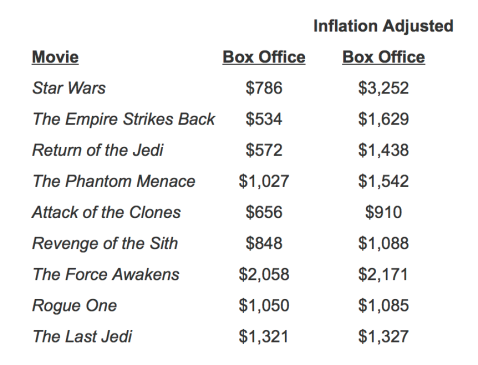 Please note: when adjusted for inflation, the original Star Wars made three-and-a-quarter billion dollars at the box office—that’s $3,252,000,000! Notice, also, the big drop-off that The Empire Strikes Back suffered, and then how the number went down a bit more for the third movie, The Return of the Jedi.

Now let’s look at the other chart (also in millions of dollars): 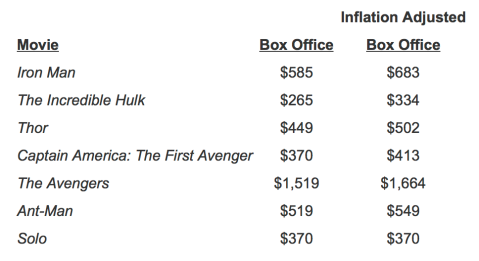 Aaron assembled this second chart to show how a single-character movie in a large franchise fares in comparison to the main courses, if you will. The Avengers and its sequels have made a whole lot more money than each single-character movie in the Marvel universe, and so we shouldn’t be surprised when Solo made a lot less money than The Force Awakens. Unfortunately, at least some execs at Disney didn’t understand this, otherwise they wouldn’t have authorized re-shooting almost the entirety of the film, bringing the cost of making Solo up to approximately $250 million (and then spent about $150 million promoting).

For the record, I liked Solo a lot. But I went into it knowing that because it’s a prequel, it will not cover any new ground. They had to show us how Han and Chewie meet, they had to show us how Han wins the Falcon from Lando in a card game, they had to show us the Kessel run. Those beats have to be hit. And because we’ve seen Han’s story play out in the original trilogy and The Force Awakens we already know who the love of his life will be, and he won’t meet her in this movie. Right? And when we meet Han in the original movie, he’s an established smuggler and scoundrel who owes money to at least one dangerous crime lord, so we can expect that this prequel will be some sort of criminal action-adventure movie. Therefore, it is nearly impossible to make this a movie that’s going to blow anyone’s mind.

They delivered a solid heist movie that did show us parts of the universe that the other films have mostly glossed over. It isn’t a bad movie, it’s just the sort of movie more likely to make $400 million than $1 billion, which can’t justify the amount they spent making it.

The angry guys who insist that this is more proof that some how the franchise whose main movies are earning more than a billion each is betraying true fans and so forth, don’t understand how the blockbuster movie industry works, compared to, say, the book publishing industry, or the gaming industry, and so forth. A cadre of true fans can make books profitable, but any group of “true fans” in any genre is simply too small a group to generate a billion dollars in revenue for a single movie.

Because the “true fans,” the kind of fans who argue about the economics of the cloud cities or who are dying to see the back story of characters in the original films are going to number in the thousands, at most. Whereas to make the sort of money that The Force Awakens made, you don’t just need millions of people buying tickets, you need at least 100 million.

And when you consider that the so-called “true fans” who are making this argument are the same guys who are angry that one of the leads of the new movies is a black man, and are furious that the primary protagonist is a woman, and are absolutely livid that another lead character is a chinese woman—well, that just means this is an even smaller fraction of the audience than simply people who are nostalgic for the original trilogy.

And with that belief system, well, it’s clear that they aren’t aligned with the light side of the force, either. That ain’t the force you’re feeling, guys—it’s hate.