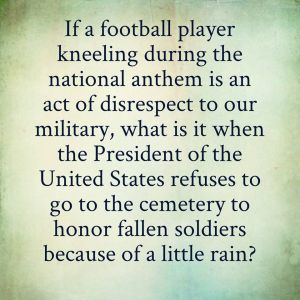 …and the President of the United States couldn’t be bothered to attend a ceremony at a cemetery full of American soldiers who died in that war because it was raining. The asshole flew all the way to Paris for the historic anniversary, but couldn’t leave his friggin’ room to go to a cemetery owned and maintained by the U.S. government where thousands of U.S. troops are burried!?! Trump Skips Visit To American Military Cemetery. And Justin Trudeau Shades Trump For Skipping WWI US Cemetary Visit Due To Rain

“It’s incredible that a president would travel to France for this significant anniversary — and then remain in his hotel room watching TV rather than pay in person his respects to the Americans who gave their lives in France for the victory gained 100 years ago tomorrow,”
—David Frum, former speechwriter to President George W. Bush

Ben Rhodes, who served as deputy national security adviser for strategic communications under President Barack Obama, said the excuse about the inclement weather did not stand up. “I helped plan all of President Obama’s trips for 8 years,” he wrote on Twitter. “There is always a rain option. Always.”

“As we sit here in the rain, thinking how uncomfortable we must be these minutes as our suits get wet and our hair gets wet and our shoes get wet, I think it’s all the more fitting that we remember on that day, in Dieppe, the rain wasn’t rain, it was bullets.”
—Justin Trudeau, Prime Minister of Canada

“They died with their face to the foe and that pathetic inadequate @realDonaldTrump couldn’t even defy the weather to pay his respects to The Fallen #hesnotfittorepresenthisgreatcountry.”
—Nicholas Soames, a British member of parliament who is a grandson of former Prime Minister Winston Churchill

But enough of that. This beautiful story, written last Memorial Day, tells about that American war cemetery in France, along with the program that paid for mothers and widows of the slain to travel there to pay their last respects in the years following the war: In an American Cemetery in France: Thoughts on Memorial Day.