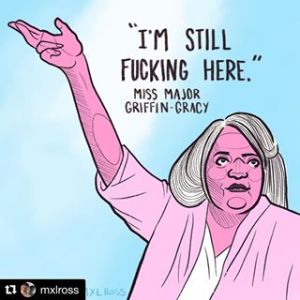 I had several news stories that either didn’t make the cut for this week’s Friday Five, or that I found after posting. And there was even a good strong theme emerging. And then I saw something that had totally slipped by me yesterday: Miss Major Griffin-Gracy Has Suffered a Stroke – The Stonewall veteran and lifelong transgender activist has been hospitalized. Miss Major is one of the trans women of color who was involved in the Stonewall Riots. Unfortunately, she was struck on the head by a cop and taken into custody during the riots, and while in jail was beaten severely. Before Stonewall, she had been actively fight for trans rights and women’s rights, and she had continued the fight for all the years since.

So, I think this Weekend Update is more of an extension of my Pride report posted last night, today I want to point you to more information about Miss Major, and the role she and other trans people of color have played in the fight for queer rights:

Here’s hoping Miss Major has a swift recovery. If you’re so inclined, send love, healing thoughts, and good vibrations for one of our heroes.