Time once again for a post in which I share news stories that broke after I assembled this week’s Friday Five post, or was a story that didn’t make the cut to the Friday Five for reasons, or brings additional information or updates to a story which I have linked to at any time previously. And as usual, I will have a some comments to go along with the links.

I admit that I have been allowing myself more than a bit of schadenfreude with regards to the Capitol rioters, aka, the Trump-supporting White Supremacist Murder Mob. But they really have done all of this to themselves: Selfie-Snapping Rioters Leave FBI a Trail of Over 140,000 Images.

And it’s not just that so, so many of them took pictures and videos of themselves committing crimes and have posted them to social media. They all carried their cell phones with them, and apparently they don’t know that phones continually ping nearby cell towers in order to see if there is a phone call coming in, and that means the phone and its location is available to be subpoenaed: Police let most Capitol rioters walk away. But cellphone data and videos could now lead to more arrests – Think rioters walked away scot free? Not so fast, say police with potent technology ready to name names. And they also think that deleting social media posts is a great way to cover their tracks. Spoiler: things you delete online aren’t really deleted, even when the service provider doesn’t let you restore it, the data is almost always still available. Also, courts have held that the act of deleting social media posts indicates that you are aware that you may be guilty of crimes (it’s a form of attempting to destroy evidence).

Not only do they not know how the technology they’re using works, but they’ve proven again and again that they don’t know how the government works. New, Dramatic Video of Capitol Rioters: ‘WE ARE LISTENING TO TRUMP’. Among the things they screamed at the cops they were beating and kicking and crushing and so forth, was the assertion that they were on a mission ordered by Trump, “your boss.” First, no, the President is not the boss of the Capitol Police. Just as he is not the boss of private citizens nor is he the boss of the entire government. The phrase “Commander in Chief” applies solely to the U.S. military. As Chief Executive, he is also the head of the executive branch. Be he is not the commander of Congress, nor the Supreme Court and the rest of the judicial branch, nor the commander of state governments, nor commander of private citizens. The Capitol Police are part of the legislative branch of government. They report to Congress itself, not to the President. Lots of people don’t understand that when the president issues an Executive Order, for instance, that doesn’t have the same weight as a law. Executive Orders are always directed at departments within the Executive Branch, setting policies of how those departments will handle certain circumstances.

More than 100 individuals involved in Capitol riots arrested. So far. Many more arrests will be coming. 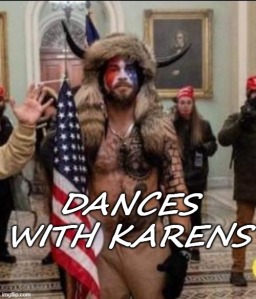 Meanwhile one of the designated clowns of the murder mob has not had a good week. Oh, yes, last week a federal judge decided that since he claimed that his all-organic diet was due to his religious beliefs, that the jailors are to accomodate that, nothing else has gone his way: ‘Q Shaman’ Jacob Chansley to remain jailed pending Capitol riot tria.

The judge said he is a flight risk because he is unemployed (literally lives in his mother’s basement), is a habitual drug user, and had demonstrated an ability to raise money quickly over the internet because he’s considered a mascot of the QAnon fuckwits and all the white supremacist groups trying to shore up the the Traitor-in-Chief. So he will not be out on bail, and the federal marshals will be transporting him from Arizona to cool his heels in a federal jail closer to Washington D.C.

And more info keeps coming out that make him look even worse: Woman says she warned Capitol Police about ‘QAnon Shaman’ rioter Jake Angeli in December.

Other supporters of the Traitor-in-Chief are also having a bad week: Trump ‘refusing to pay’ Rudy Giuliani’s legal fees after falling out – President said to be offended by personal lawyer’s demand for a reported $20,000 a day. Donald is famous for not paying people the money he owes them. Why does anyone ever agree to work for him?

Oh, wait, well apparently Giuliani is finding a way to get money out of this gig: Giuliani associate told ex-CIA officer a Trump pardon would ‘cost $2m’ – report. Just slip Rudy a couple million dollars, and he’ll put in a good word for you with the Pres… except we now know that Donald has stopped taking Rudy’s calls.

Rudy isn’t the only one getting in on this particular grift: Trump Allies Rake In Huge Fees From Pardon Seekers – The president’s allies have collected tens of thousands of dollars — and potentially much more — from people seeking pardons.

I could make more snarky comments, but this article rounds up things that the various late night hosts have said about Rudy’s situation, so I’ll let you go read those: Seth Meyers on Trump refusing to pay Giuliani: ‘No more perfect way for this to end’.

One of the videos I linked to on in the most recent Friday Five included a joke about Donald trying to steal things while packing up to leave, specifically a bit about a bust of President Abraham Lincoln. After delivering the scripted joke, Seth Meyers then said, “This was a joke we wrote this morning. But wouldn’t you know it…” and then he cut to footage from some of the news channels taken outside the White House, showing a staff member walking out of the White House carrying the bust of Lincoln. Which brings us to: No One Will Take Responsibility for That Abraham Lincoln Bust Seen Leaving the White House.

Of course, Donald has so many other legal troubles… Atlanta Prosecutor Appears to Move Closer to Trump Inquiry – The Fulton County district attorney is weighing an inquiry into possible election interference and is said to be considering hiring an outside counsel. These would be state criminal charges in Georgia. If Donald issues a pardon to himself, and if the courts uphold it, it would still have no effect on these charges, because the President can only pardon federal crimes. Similarly to the criminal investigations against the Trump organization and family in New York State, and another set on-going in Connecticut… and those are just the ones I’ve been keeping track of.

Since becoming President, Donald has been documented making literally thousands upon thousands of lies. CNN’s Daniel Dale has tried to pick the fifteen worst of all of those lies: The 15 most notable lies of Donald Trump’s presidency.

Finally, who could have possibly foreseen this: Election Disinfo Plunged After Twitter Banned Trump. (Spoiler: everyone who has been paying attention, that’s who!)