About a year and a half ago I found myself discussing phones with a friend of a friend. At the time, I didn’t own an iPhone. My phone was a Samsung Alias 2. It was a very clever design, that could open either like an old flip phone, or sideways and use a full Qwerty keypad.

It wasn’t a smart phone. It was a “feature phone” which meant I got a few poorly designed apps (seriously—the phone had e-ink keys, which could have displayed any character they wanted, but the calculator app still expected you to understand the plus was mapped to the ->; arrow key, and minus to and <;- arrow key, and multiply to the ^ arrow key, and so on), and if I wanted to pay about twice as much as a user with a real Smart phone would pay for a data plan, I could have email on the phone. And if I wanted to pay that much again, I could have a ridiculously low amount of web browsing.

I loved that phone. That design was innovative. I would have liked a better interface for the silly apps, but I understood going in that it wasn't a smart phone, and they weren't charging smart phone prices for the phone itself. It wasn't the manufacturer's fault that the carrier was being a dick about data pricing. It didn't cost them four times as much to give email and web access to this phone as it did to send it to an Android or Windows phone on the same network. It was a great phone, and I still highly recommend the model to people, if you can find it.

But I didn't need a smart phone, I argued then, because I owned an iPod Touch, and frequently had access to free wifi. When I didn't have access to wifi, I was usually with my husband, and he had a Droid with a data plan (from the same carrier, we were on a shared family plan). So he could look up things if we needed it.

The guy I was talking with explained how he had had a Blackberry for a few years, but had switched to the iPhone as soon as they came out with the iPhone Nano.

I thought he was joking. But he insisted that he had an iPhone Nano. "I told the salesman that I had loved the iPhone, but it was too expensive. And he asked me if I had seen the iPhone Nano, which was so much cheaper."

I told him there was no such thing as an iPhone Nano.

He said, "People keep telling me that. But I have one. Maybe Apple only released it for a little while then decided to discontinue it."

So I asked him to show it too me.

He pulled out his phone, and it looked something like this: 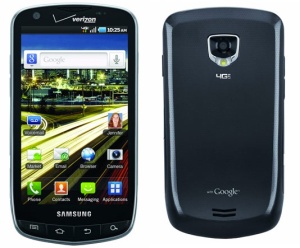 It wasn’t this exact model. I don’t think the model of Samsung phone pictured had been released, and his had had been from AT&T. After a quick search of images, this is the first one I found that looked like his.

But I pointed out the Samsung logo, rather hard to miss. And told him it wasn’t an Apple iPhone. That it was an Android phone.

He got a little huffy, and oddly enough accused me of being an Apple Hater. He showed me several things on the phone, specifically certain icons that did, indeed, look an awful lot like the icons for similar apps on my iPod Touch.

Now, it was a salesperson at an AT&T store who told him it was an iPhone Nano, and his own stubbornness (and perhaps a little bit of denial that he had been taken in by the salesperson) that was primarily to blame for his insistence that it was a cheap model of an iPhone. But the salesperson couldn’t have had a hope of getting away with it, and wouldn’t have succeeded in his deception if the phone itself, not just the general idea of a touch screen, but the specific icon set, the overall UI, and so on, had not been such a slavish knockoff of the iPhone.

I had played with several Android phones whose interfaces did not mimic iOS to the degree that this Samsung phone did. It’s not that difficult to make a touch screen user interface that looks and feels significantly different.

Telling someone they can’t sell a knock off is not stifling competition. You know what does stifle competition and innovation?

Encouraging or cheering on the people selling the knock-offs.