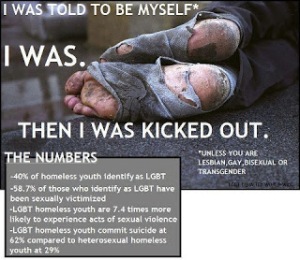 Every minute I’m blogging is a minute I’m not adding to my NaNoWriMo word count, but some things have crossed my virtual desktop since making yesterday’s Friday Links post that I think need to be shared.

First, many weeks back I shared links to the story of Joel Andrew, an 18-year-old student who was kicked out by his parents for being gay. They didn’t just kick him out, they refused to pay for tuition at the college he was enrolled at, they refused to sign any financial aid forms (which means that legally he can’t apply for federal aid until he turns 25, yes it’s a thing), and they demanded that he stop using his last name (Andrew is not his original surname). The daughter of his dance teacher set up a GoFundMe page to raise money to pay his tuition for one semester, tons of people donated, and so on. There’s more news, and it’s good news (as much as you can get from a story like this): College Dance Student Raises $60K For Tuition After Parents Disown Him For Being Gay. Go read the linked stories.

The parents now claim that they didn’t kick him out, and didn’t demand that he stop using their last name, but I strongly suspect that’s a case of the classic, “I didn’t tell him he had to move out. I told him that if he was living under my roof who would have to stop seeing his boyfriend, stop admitting he’s gay, et cetera, et cetera.” Anyway, Joel is doing alright, now. Which is good. I want to echo Dan Savage’s comments that there are a lot of Joels out there who didn’t have someone to set up a GoFundMe page. We can help kids like Joel by donated to organizations such as the Ali Forney Center, the True Colors Fund, or the Point Foundation. There are a lot of local charities that serve the homeless, particularly homeless teens. Find one near you and help if you can.

Second: I included one link yesterday to news that the Latter Day Saints church has officially declared that gay members are no longer simply sinning, but are now apostates, and not only that, but that children of gay people in same sex relationships are banned from Baptism and serving in the church until they turn 18 and then only if they renounce their own parents. As Natasha Helfer Parker writes at Patheos: ‘…how dare we go against our own doctrines and punish the children for the “sins of their fathers?”‘ Being an apostate means that one has renounced or completely abandoned their faith and it in utter rebellion against said faith and principals. Calling being in a gay relationship ‘apostasy’ puts it on par with murder and rape, and as more than one observer as commented, the church doesn’t refuse baptism to the children of murderers nor rapists. It’s got more than a few members upset, obviously.

It would be really easy to make snarky comments. When stories like this are posted on gay news sites, there are always people chiming in with, “what gay person would want to live in {fill in name of extremely conservative state}” or “why would anyone want to belong to a religion that doesn’t welcome them?” or “all religions are B.S. anyway, so why should we care?” and so on. My answer remains the same: we don’t choose where we are born and we don’t choose which family we are born into. As children we were dependent on our families and communities of origin for the means of survival. Policies like this hurt people who cannot protect themselves. They create an atmosphere of bullying and coercion that drives children to commit suicide. And particularly in close-knit communities that encourage extended families to remain close and depend upon one another, this kind of intolerance ruins lives.

The repercussions of B.S. like this reach well past childhood or the children directly impacted. These teachings are what drives parents to kick their children who appear to be gay, lesbian, bi, or trans from their homes, for instance. The LDS church isn’t alone in this by any means. The Southern Baptists can claim that they love and respect everyone, but when in the same statement about marriage equality they say “Silence in the face of evil is itself evil” they’re saying to every queer or questioning kid growing up in their churches that they way they were born is evil. Which will lead many of them, after years of praying and doing everything in their power to stop feeling the way they do and being who they are to believing they are irredeemable and inherently unlovable. Just as the Catholic church can keep tricking reporters into repeating the claim that the church is “more welcoming to LGBT people” when that welcome is not unlike the parents I talked about earlier—you’re welcome to be told again and again that who you are is inherently disordered and you may only stay so long as you live a miserable, lonely existence constantly denying who you are.

Third: The loss of the Houston Equal Rights Ordinance is not simply a matter of one city. Nor is it as simple as hate and ignorance winning. We need to do some evaluation like this one: Why Houston’s Equal Rights Ordinance Failed 80 if for no other reason that we’ve seen before that the anti-gay folks will reuse arguments that worked once again and again to take rights away. They are going to mount more campaigns just like this one to try to take away protections in jobs, housing, and so on. It isn’t a new tactic, by any means, but it’s one that can be made to work: How The Religious Right Learned To Use Bathrooms As A Weapon Against Justice

And they aren’t just using it to get anti-gay people to vote against us, they are already trying to get us to turn on each other: Homocon Petition: Drop The “T” From LGBT. It’s an anonymous petition. It is being promoted by certain gay republican jerks who have in the past argued against marriage equality and anti-discrimination laws. Scores of books can be written about why those folks actively participate in their own oppression, but make no mistake: this petition is not coming from people who have the well-being and rights of any queer person in mind. It’s called divide and conquer. If they can get us fighting among ourselves, it will be easy to not just stop the advancement of freedom, but to actually turn back the clock.